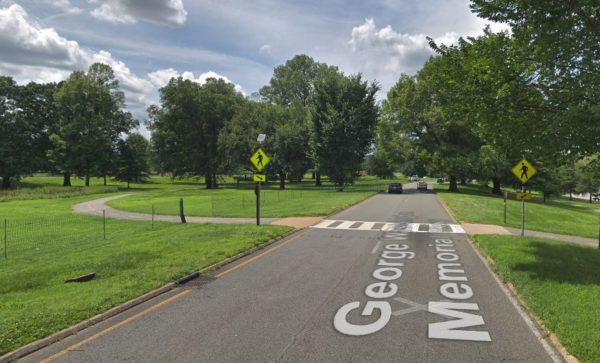 A driver struck a woman with their car while she was crossing the G.W. Parkway just south of the Arlington Memorial Bridge yesterday (Thursday), in what’s long been a troublesome stretch of road for pedestrians.

The woman was in the middle of a crosswalk just south of the bridge at the time of the incident, according to U.S. Park Police spokesman Sgt. Eduardo Delgado.

Police believe that the right lane of traffic had stopped for the woman, but a vehicle in the left lane didn’t, Delgado added. Arlington Fire Department spokesman Ben O’Bryant said the woman was conscious when first responders arrived, and she was transported to a local hospital “in good condition.”

The stretch of the parkway leading up to the bridge has often been the scene of dangerous crashes involving pedestrians. Officials estimate that the area saw approximately 600 crashes between 2006 and 2012 alone.

Park officials are even in the process of weighing a variety of changes along the parkway and the nearby Memorial Circle to make them a bit safer for pedestrians.

In fact, some of the potential improvements would target crosswalks on the parkway south of the bridge, like making them a bit more visible for drivers or even narrowing the parkway to one lane as it approaches crosswalks.