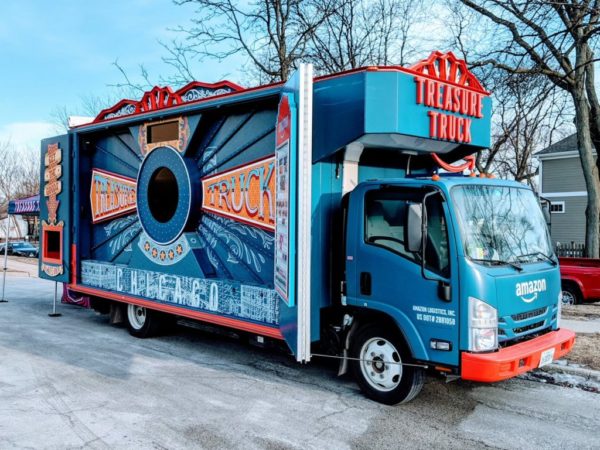 Amazon is sending a pop-up store into Crystal City today with the hopes Arlingtonians will stop by.

The store-on-wheels is dubbed the “Treasure Truck” and travels the country offering “new, trending, local, or delicious items” per a company spokesman. Today the truck will be parked at 2011 Crystal Drive until 1 p.m.

Amazon app users can sign up for notifications that alert them when the truck opens and whatever the truck is offering that day. Users can then purchase the items they want online and pick-up in person at the truck.

In the past, the truck has served up an array of items from brownies to gold Bohemian Rhapsody movie backpacks to lightbulbs, according to Twitter posts.

Indulge your sweet tooth on Treasure Truck today with brownies from Chicago's JR Dessert Bakery, just 19.99. And in select cities, pick up a free bag of new @BearNaked premium granola, too (while supplies last)! Treat yourself at https://t.co/IctiLxp7dc pic.twitter.com/cTIOx3GBVk

The truck’s inventory was not available to this reporter online as of 10:45 a.m. this morning.

Amazon’s treasure truck heralds the company’s impending move to the area scheduled for 2021, when it will begin construction for its second headquarters in the Crystal City and Pentagon City area that some local officials have attempted to rebrand as “National Landing.”

The trillion-dollar company’s promise to occupy long vacant real estate and add 25,000 jobs comes in exchange for $23 million in county grant money, $750 million in state incentives, and a head’s up on any Freedom of Information Act Requests, according to documents released this week. It’s a deal that’s drawn criticism from unions and affordable housing advocates as ARLnow previously reported.

Arlington County has also been criticized for directly pitching tax incentives Amazon would be eligible to receive, but which few other businesses have taken advantage of, as ARLnow reported this week.