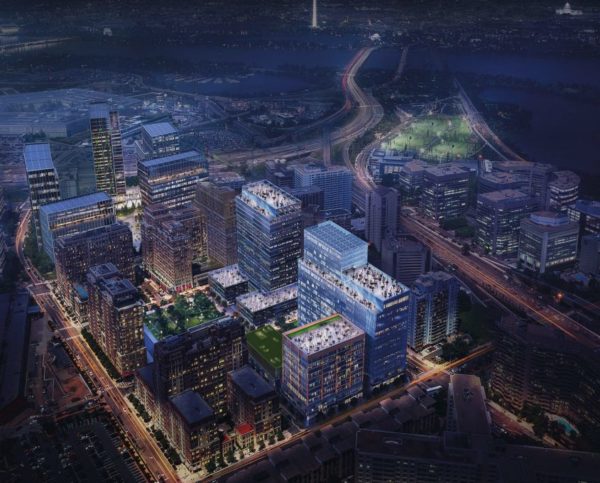 Amazon is showing an increasing willingness to sign a collective bargaining agreement with local unions before it sets to work building new office space in Arlington, perhaps meeting a frequent demand of activists concerned about the tech giant’s labor practices.

Though the company cautions that nothing is set in stone until county officials formally sign off on an incentive deal to bring the tech giant’s new headquarters to Crystal City and Pentagon City, Amazon is sending signals that it’s open to the prospect of striking a “project labor agreement” with construction workers who could someday erect the company’s future home in Arlington.

Should the company someday strike such a deal, commonly known as a “PLA,” the agreement would set out the employment conditions for all workers involved in Amazon’s construction efforts (whether or not they belong to a union) before the company starts accepting bids for the project. The PLA could govern everything from pay rates to workers’ compensation claims, and the agreements are generally designed to ensure labor peace during a major project while also improving conditions for workers.

“We’re definitely open to it,” Amazon spokeswoman Jill Kerr told ARLnow. “But this is all still pretty early. We really have our heads down, focused on working with the community on this initial package for approval before county officials.”

Kerr says that company has already held an initial meeting on the topic with representatives from the Baltimore-D.C. Building Trades, a coalition of unionized construction workers, and JBG Smith, the company’s future landlord at some existing buildings and development partner for other properties.

A spokesman for JBG Smith declined to comment on the deliberations, but Kerr stressed that discussions were “all hypothetical” and remain very much in the earliest possible stages of debate. Amazon plans to both build new offices in Pentagon City and renovate others in Crystal City, and Kerr believes it’s too early to say how any future PLA would apply to that range of projects.

However, Steve Courtien, the D.C. field representative for the building trades, came away from the meeting cautiously optimistic about the prospects of someday striking a deal with Amazon.

During a Feb. 3 town hall on Amazon convened by Arlington Democrats, he said the company seemed generally “positive” about the idea, particularly because the tech firm has worked out PLAs for some of its other projects around the country — Kerr said she was unable to confirm that latter assertion.

As for JBG Smith, Courtien said the idea of a PLA was more of a “mind bend” to them, but he fully expects the development firm to follow Amazon’s lead, given the size of the company’s investment in the area.

“That’s what they have to get past,” Courtien said. “Amazon basically has to tell JBG, ‘this is what we want,’ then they say ‘OK’ and negotiate the PLA with private contractors.”

The County Board is signaling that it’s broadly supportive of those efforts, and members have said in the past that they’ve encouraged Amazon to strike a PLA before moving into Arlington.

But Virginia law prohibits government agencies from requiring PLAs as a condition of allowing new construction (in keeping with the state’s tradition of pro-business, anti-union regulations) and county officials are cautioning that they’ll only have a limited role to play in the discussions.

“I think I speak for the whole Board in saying it’s something we’re all supportive of,” County Board member Erik Gutshall said during the town hall. “But it’s not something we can legally mandate from them.”

Anti-Amazon activists have been similarly enthusiastic about the idea of a PLA for the company’s construction work, considering the frequent concerns raised about how the tech giant treats its warehouse workers.

Stories of employees being unable to take bathroom breaks without risking their jobs or warehouses filled with boiling heat in the summer and freezing cold in the winter have spooked many county residents. Roshan Abraham, a leading Amazon critic as part of his leadership role with the progressive group Our Revolution Arlington, also points out that the company has pledged to oppose any unionization efforts it encounters at its other new headquarters in New York City.

That’s why Abraham believes it will be crucial for Arlington workers to secure a PLA before Amazon comes to town, though he fears it might not be enough to combat the huge company’s power.

“We shouldn’t stop just at a PLA,” Abraham said during the town hall. “We should be pressuring them even further to stay out of their union-busting behavior, which has been pretty well documented elsewhere.”

Ultimately, Abraham is so skeptical of the company’s business practices that he believes it’s a poor fit for Arlington’s values (even though he is “not that deluded” to believe that the county will turn down the company’s new headquarters).

Board members say they have their own concerns about Amazon’s ethics, whether it signs a PLA or not, but they don’t believe they’re substantial enough to justify barring the company from moving in.

After all, Gutshall pointed out that Arlington is also home to Boeing, a major military contractor, and while he may not like that they “manufacture equipment that is designed to kill people all over the world,” he hasn’t tried to chase the company away.

“We’ve not made it a condition of a corporation locating here or a resident locating here to abide by our progressive values for how you conduct your business,” said County Board member Katie Cristol. “Some 10 or 15 percent of Arlingtonians voted for Donald Trump. I’m not a fan of that, but I’m not going to try to kick them out of Arlington County or say they can’t live here.”