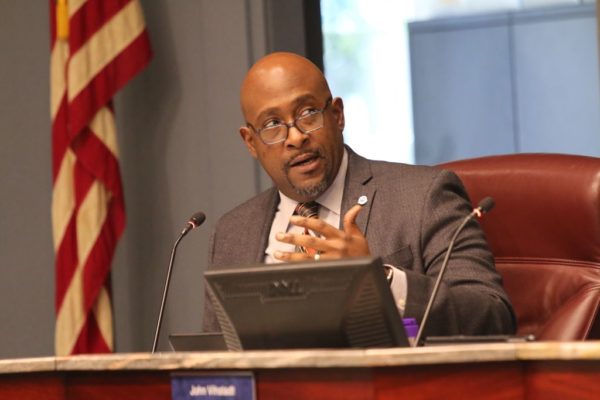 Arlington leaders are pushing back their consideration of an incentive package to seal the deal for Amazon’s new headquarters by at least a month.

Ever since the tech giant announced its plans to bring 25,000 workers to the county in mid-November, the County Board has pledged to hold a public hearing and vote on the logistics of its offer to Amazon no earlier than its Feb. 23 meeting.

But officials have begun hinting in recent weeks that they may miss that self-imposed deadline, and Board Chair Christian Dorsey confirmed those intimations at the Board’s meeting yesterday (Tuesday).

“February was the date that was targeted, but it’s not going to be before March that it’s before this Board,” Dorsey said. “We just want to give everyone that comfort and peace of mind.”

It seems the Board plans to use the extra time to convene additional community discussions about the company’s plans to move in to Pentagon City and Crystal City.

New Board member Matt de Ferranti added Tuesday that the Board will soon be extending an invitation to all the county’s civic associations for more community meetings on Amazon. De Ferranti said that each group will be able to request that up to two Board members attend a neighborhood gathering on the subject in the coming weeks.

Thus far, the Board has held just a pair of community “listening sessions” on Amazon. Those gatherings have proven to be contentious ones, with the company’s fiercest opponents using the events as chances to register their concerns about the tech giant’s business practices and potential to further gentrify Arlington neighborhoods.

Others still say they’re deeply concerned about the prospect that state and county officials could soon send hundreds of millions of dollars in incentive money to a company owned by the world’s richest man.

State lawmakers signed off on an incentive package just this week to direct up to $750 million in tax rebates to the company over the next 15 years or so, though the county’s offer is a bit more modest.

Arlington is proposing to send $23 million in grant money to the company over the same time period, with the money to be drawn from a projected increase in hotel tax revenues driven by Amazon’s arrival in the region.

The county would also agree to spend $28 million over a 10-year period on infrastructure improvements around the proposed headquarters, with the money coming from a preexisting property tax levied on businesses across Crystal City, Pentagon City and Potomac Yard. Additionally, Arlington has agreed to help the company build a helipad at the new headquarters, though securing federal approval for that effort could prove to be quite challenging.

The County Board could consider the incentive offer next month during either its March 16 or March 19 meetings, should officials not avoid additional delays.

So long as the Board approves the deal, as is broadly expected, the company would then begin submitting plans for the construction and renovation of several buildings across Crystal City and Pentagon City, requiring additional county approvals.