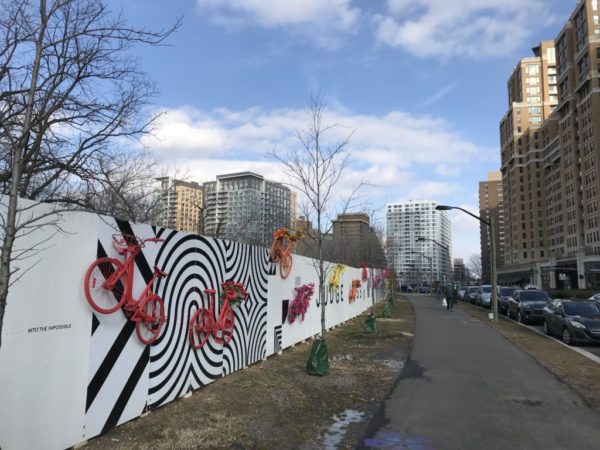 The County Board is poised to pass a controversial incentive package for Amazon this Saturday, which could help bring tens of thousands of jobs and millions in added property taxes to Arlington County, at the cost of tens of millions in tax subsidies for one of the world’s largest companies.

The Board is scheduled to vote on the multi-million dollar incentive package during their regularly-scheduled Saturday meeting, which is Amazon’s last hurdle to clear before beginning development on their new headquarters slated to start construction in 2021.

The meeting begins at 8:30 a.m. at the Bozman Government Center in Courthouse, however, the Amazon part of discussion isn’t scheduled to start until after 1 p.m., per an agenda summary and the hearing is expected to be dogged with public protest from critics opposing Amazon.

The county’s incentive package was first publicly released earlier this month and features a 15-year, estimated $23 million incentive given to Amazon if the tech-and-retail giant meets office space occupancy goals over several years. The company would need to fill 60,000 square feet of office space starting in June of 2020 and meet benchmarks towards occupying 6 million square feet by 2035.

The incentive is funded from a portion of the increases in hotel tax revenue that officials predict from Amazon’s “HQ2” moving to the region.

The incentive package up for a vote Saturday also includes plans to spend $28 million over a period of 10 years to update infrastructure around the proposed headquarters, in addition to the state’s multi-million-dollar contribution. That money will be pulled from a portion of the increase in commercial property tax revenue in the Crystal City area that results from Amazon’s arrival.

The county also offered to at least try to fulfill Amazon’s request for an on-site helicopter pad on-site despite residents’ ongoing complaints of existing helicopter noise and the region’s strictly-enforced no-fly zone.

Amazon announced it selected Arlington as the site for its second headquarters in November, promising to bring at least 25,000 jobs and occupy 6,056,000 million square feet of commercial space in the Crystal City and Pentagon City areas, which have experienced high vacancy rates for the last 15 years.

County Board Chair Christian Dorsey said in February the expected number of Amazon jobs is now higher because the company cancelled its other headquarter plans in New York City.

The incentives have drawn persistent criticism from activists who believe the county shouldn’t be giving any incentives to a company run by the world’s richest man — and who fear its relocation to Arlington will exacerbate the county’s affordable hosing shortage. Critics have also raised red flags about a portion of the agreement that gives Amazon advance notice of FOIA requests.

On Friday, local activist coalition “For Us, Not Amazon” announced a noon protest outside the county government steps on Saturday before the vote.

“While the County tries to ignore us, For Us, Not Amazon has been doing the real community engagement, knocking doors, listening to community members’ concerns and it’s time to make sure Arlington County officials listen to every one of us before this sham gets voted on,” the description of the rally reads.

The head of Arlington’s Chamber of Commerce argued the package was a “good deal” for the county in a Thursday op-ed on ARLnow, writing that “focusing on the Transient Occupancy Tax means that taxes on Arlington residents and businesses will not fund these incentives and that Amazon will receive these payments only if our hoteliers grow their businesses too.”

For Us, Not Amazon’s member organizations knocked on doors earlier this week to gather petition signatures opposing the incentive package.

Thank you everyone from today's canvass in the Nauck community, a historically black neighborhood that was not included on the list of civic associations that the Arlington board has reached out to.

There must be a public hearing and real outreach before any vote on incentives. pic.twitter.com/kKVp7ESV5x

On Monday, 30 advocacy and community organizations — including the Nauck Civic Association and the Arlington NAACP, among statewide and regional groups — signed a letter requesting the County Board “postpone the vote on incentives and hold public hearings to foster transparency and understanding.”

The Board originally planned for a February public hearing and vote on the incentives but rescheduled to March, citing the need for more community discussions.

Saturday’s vote does not include the state’s $750 million-incentive package to Amazon, which the Virginia General Assembly overwhelmingly approved in January.

This weekend’s Board meeting will also not include ideas county officials pitched Amazon but didn’t officially include in the incentive package — such as suggesting Amazon take advantage of a little-used technology incentive program to potentially save millions in taxes, as first reported by ARLnow.