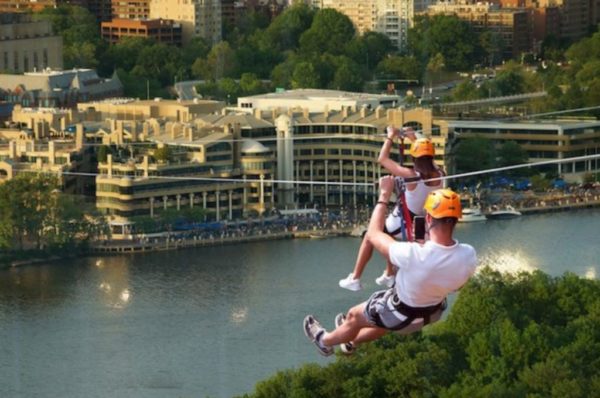 It was an April Fools’ Day joke, but an interesting one.

The Rosslyn Business Improvement District, riffing off the much-ballyhooed but not-actually-happening Rosslyn-to-Georgetown gondola proposal, floated an idea: a zip line over the Potomac.

"The Rosslyn-Georgetown Zipline will provide a direct link for commuters and visitors who want a faster connection across the Potomac River and fills a gap in our regional transportation network," said BID President @MaryClaireBuric. (2/3) https://t.co/NeKyMs1eBd pic.twitter.com/ERbPcDsoOA

Putting aside questions about feasibility — for instance, is it a good idea to have a zip line running across a major airline and helicopter flight path? — an argument could be made that a zip line would be a fun local activity and tourist attraction.

If this was a real proposal — again, putting aside whether it could actually work — would you be in favor of it?