The main venue for this education is a series of summits where programmers and experts talk about the latest developments.

Pete Erickson, founder of Modev, said one of the big challenges Modev works to solve is helping developers understand just how different developing for voice controls is.

“People are building for mobile, but how do you develop for voice?” Erickson asked. “When mobile came out, user experience was the big new profession. Now, it’s conversational designers. You can’t just slap a voice on the front end — you have to build that from the ground up.”

The current market is for functional home interfaces, where a monotone robot can change the channel or lower the temperature. But Erickson said the market is going to rapidly move towards increasingly realistic conversations.

“Voice is going to be all about customization,” Erickson said. “Just as with mobile apps, voice can measure preferences and habits and be used to synthesize custom voices.”

Erickson says a person using the voice activation for day-to-day home functions will need a different voice to interact with a 7 year-old or an elderly person with dementia. 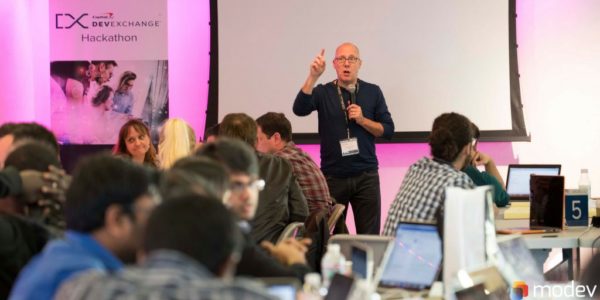 Modev started ten years ago in a pizza shop in Rosslyn. Erickson had just gotten married and moved to D.C. after years of working in the Seattle technology industry and wanted to meet with other locals who worked in smartphone development. Within a year, the group had 1,000 members.

By then, Erickson started to brand the group as Modev — a portmanteau for mobile development. The group’s first development conference had 325 attendees, and Erickson decided to turn the group into his full-time business.

A decade later, the group has events across the country and in places like Hong Kong. Erickson said most of the money comes from sponsorship, which also gave them the connections to put together the first conference on developing voice controls for Amazon’s Alexa, Amazon’s virtual assistant.

Rather than hold one central conference, Erickson said the team spent three months of 2017 traveling to 10 cities to meet with developers and help them build for Alexa.

Modev hosts several events every year focused around different aspects of development, like the upcoming VOICE Summit on July 22 in Newark, New Jersey or the management-focused EXO Software Leadership summit on Sept. 15 in Aspen, Colorado.

There are nearly 400 proposals currently being sifted through for Modev’s big conference planned for the VOICE Summit. Founder Pete Erickson’s team is sorting through the projects currently and narrowing it down to 75-100 projects that will have a chance to give a demonstration. The conference last July was expected to have 1,500 attendees. Over 3,000 showed up.

But as they’ve been going through the projects, Erickson said he believes there’s potential to do something newer and bigger. Erickson likes the in-person conferences, but he also has first-hand knowledge of how valuable online conferencing can be.

There are nearly 20 people working at Modev, but the headquarters is just Erickson sitting at a desk in the Ballston Techspace coworking space. Erickson said most of the company is spread out across the country now, and they collaborate online. It’s an experience that Erickson says the company can use to change the way the conferences are held.

Rather than host an in-person conference with a limited number of attendees and performances, Erickson said work has already started for a conference on Feb. 20, 2020, that will live-stream worldwide with a broader selection of presentations.