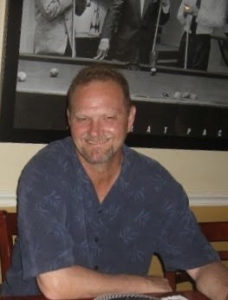 Whitney passed away Wednesday, April 10, after being diagnosed with cancer last May, according to his business partner Chris Lefbom and his father Herbert “Bud” W. Whitney.

The restauranteur was behind some of Arlington’s most enduring watering holes, including Rhodeside Grill in Rosslyn, Ragtime in Courthouse and William Jeffrey’s Tavern on Columbia Pike. He also opened several restaurants in Falls Church.

Whitney was born in Tyler, Texas in 1958 and studied construction before finding a taste for the restaurant industry while working part-time at a barbecue joint in Lubbock, Texas, according to an obituary written by his father.

After moving to Arlington in 1988 as the local manager of the Black-Eyed Pea restaurant chain, Whitney delved into his first venture by buying eatery T.T. Reynolds in Fairfax. Then in 1994 he re-opened U Street’s Republic Gardens and later sold it. In 1994 he founded the Rhodeside Grill on 1836 Wilson Blvd which remains open today.

It was at Rhodeside Grill that he hired Adam Lubar and Lefbom as bartenders, later opening Ragtime (1345 N. Courthouse Road) together with them in 2001.

One of Whitney’s most recent ventures was William Jeffrey’s Tavern at 2301 Columbia Pike, which he opened with business partners with Lubar and Lefbom in 2011. Previously, the trio opened Dogwood Tavern in Falls Church.

To Lubar and Lefbom Whitney was “a mentor, boss, manager, partner and friend to hundreds of restaurant employees over the years,” the two said in a Facebook post last week.

When he wasn’t helming his armada of restaurants, Whitney enjoyed boating on Lake Barcroft, practicing carpentry, and the Washington Nationals, Lefbom told ARLnow.

“He was scheduled to retire in July and didn’t quite make it,” Lefbom said. “I would’ve loved to see him relaxed in retirement with zero stress from the restaurant industry. He deserved it.”

Whitney lived in Arlington for the past 23 years and is survived by his wife Alica Lima-Whitney and two daughters Emma and Clara as well as his extended family: parents Herbert “Bud” W. Whitney and Elaine Whitney and sister Merrie Whitney of Richardson, Texas, brother David Whitney of Montrose, Colorado, and sister Laura Daly of Austin, Texas.

Rhodeside Grill, Ragtime and William Jeffrey’s Tavern were all closed for lunch today (Monday) to allow restaurant employees to “say goodbye to and celebrate the life of our friend, co-worker and boss,” according to social media posts.