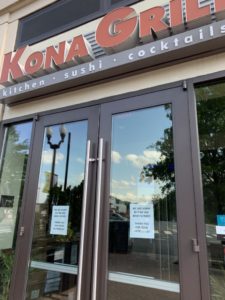 (Updated at 3:15 p.m.) Rosslyn’s Kona Grill is gone for good, the restaurant confirmed in an announcement one tipster forwarded this afternoon.

“Want to thank all our guests for their patronage and hope you’ll visit Kona Grill again when you are near our other locations,” the company’s announcement read.

Tipster Rob Stern said he saw received the announcement as a rewards club member and he is sad to see the restaurant go.

“I’d made a point to go to Kona Grill when I was in town for visits, from Raleigh, NC,” said Stern. “I’ve also enjoyed their Orlando location. Their salmon and macadamia nut chicken were two of my favorites.”

Four other tipsters sent ARLnow pictures of the signs that thank people for their patronage, saying, “We are sorry but we are now closed!!”

The restaurant, located at 1776 Wilson Blvd, served a mix of American fare like sliders and pan-Asian dishes like sushi and pad Thai noodles, according to its menu.

Last week, the Business Journal reported that the company’s shares were delisted from the stock market.

As of today (Monday), calls made to Kona Grill’s Rosslyn location went unanswered and the restaurant was no longer listed on the chain’s map of locations.

A Yelp reviewer noted yesterday (Sunday) that “stuff is packed up in large plastic tubs, and furniture is being loaded onto a box truck.” The restaurant’s Facebook has not posted since mid-February.

The Rosslyn location originally opened in 2015. At the time, Kona’s general manager Joesph Ortega said Rosslyn was scouted because, “It’s a growing area, young and upcoming” which he hoped would gel with the restaurant’s “very hip or retro feeling.”