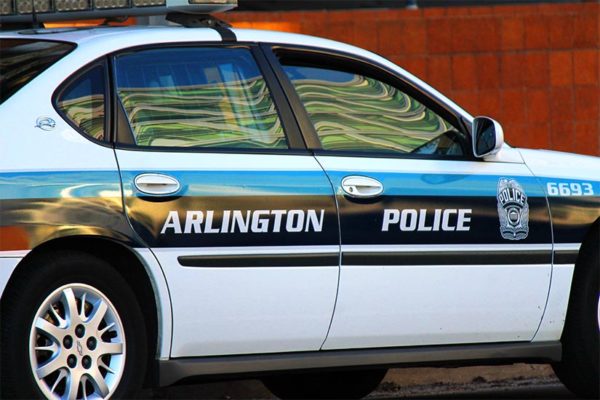 (Updated at 5:45 p.m.) Arlington County’s crime rates have continued to fall for seventh straight year, with a few exceptions, according to a new report from the police department.

The county’s murder rate held steady, with four murders reported in both 2017 and 2018. However, the data also shows some increases in offenses for drunkenness, and bribery and extortion. 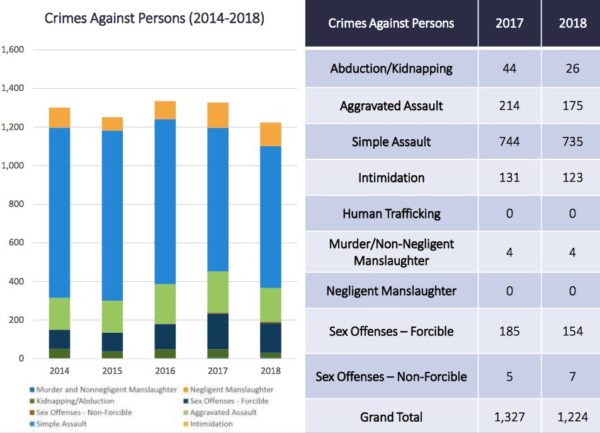 ACPD spokeswoman Ashley Savage noted that bribery and extortion charges can result from online or phone scams, and that both were “prevalent in 2018” which caused the department to lead several community awareness campaigns.

Chief M. Jay Farr noted that by May of last year the department was suffering from a staffing shortage with only 320 “functional” full time officers out of the 361 the county budgeted for.

“Our Department has a dedicated pledge of serving the community with duty, honor, and commitment,” Farr wrote in a statement in the report. “While we have experienced challenges this year, our sworn and civilian staff have risen to the task each day and embodied our pledge through their actions.”

The biggest crime increase noted in the report was for offenses related to “drunkenness” charges: in 2017, 273 offenses were recorded related to drunkenness charges, compared to 622 last year. 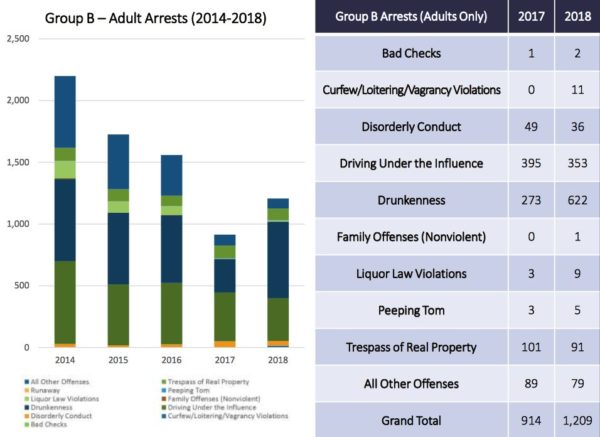 Savage told ARLnow one reason the number is so high could be an issue with last year’s data.

“The number of drunkenness arrests appear to be underreported to the state in 2017 due to a data processing issue,” she said. “Our Records Management Unit is currently working with Virginia State Police to rectify the issue.”

Another reason could be ACPD’s crackdown on “nightlife safety.” In addition to increasing patrols around Clarendon bars last year, the department also partnered with restaurants to train staff in responding to emergency situations and report them to law enforcement:

The report noted that as part of ACPD’s “Restaurant Initiative” it trained 28 restaurants and 260 employees in the health and safety protocols.

Arlington has seen the number of people seeking treatment for opioid addiction skyrocket in recent years. However, data shared in today’s report indicates that while the number of opioid-related incidents reported to 9-1-1 last year (153) remained close to 2017’s number (157), the number of overdoses decreased (53 in 2018 compared to 74 in 2017) and fatal overdoses also fell from 19 in 2017 to 11 in 2018.

“While these decreases are encouraging, the opioid crisis remains a significant issue facing our community and Arlington remains committed to developing strategies to promote awareness and action,” the report says.

Savage said the focus on addressing the opioid epidemic also had another side effect: dropping the number of prostitution-related offenses from 54 in 2017 to 19 in 2018.

“As a result of the ongoing opioid epidemic in America, the department has focused more resources in our Organized Crime Section to investigating opioid-related incidents by prioritizing cases involving heroin and opioids,” said Savage, who added, “As a result, the department has conducted less proactive prostitution investigations. Most arrests for prostitution in 2018 are complaint-based.”

ACPD says its take-back boxes for prescription drugs have also shown promise. The report notes that six months after setting up three 24/7 boxes to dispose of unwanted medications they had collected 1,000 pounds of drugs.

The report also noted that police investigated and charged several students who allegedly made bomb or school shooting threats. In the wake of the 2018 Parkland massacre, police said that they investigated 30 reports of potential school shooters. All told, three students were charged during the course of the year for making threats.

Among them was an 18-year-old Marymount University student who was charged with Communicated Threats to Bomb a Structure and sentenced to three years probation. In another incident, two W-L high schoolers were charged with Threats to Commit Serious Bodily Harm to Persons on School Property after posting shooting threats on Snapchat.

END_OF_DOCUMENT_TOKEN_TO_BE_REPLACED

More Stories
The Right Note: Spin Machine on Full DisplayAdvertisers: Here’s How to Write an Effective Promoted Post on ARLnow