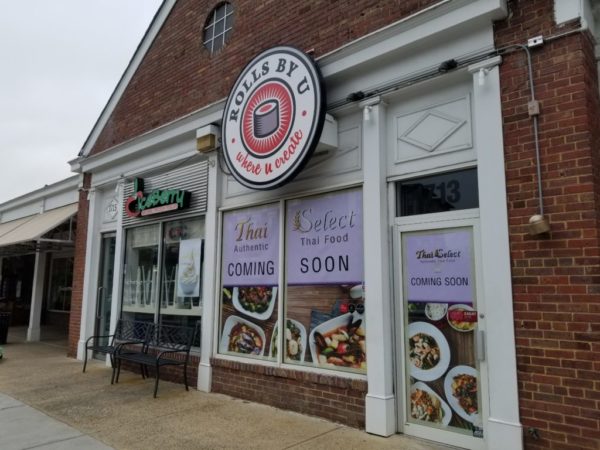 A new Thai restaurant is set to open in the Colonial Village Shopping Center near Rosslyn.

“Thai Select” is currently redecorating the space formerly occupied by sushi restaurant Rolls By U and is hoping to open next month, staff told ARLnow today (Thursday).

The owners behind the new restaurant near Rosslyn and Colonial Village are Debbie Piamsiri Ratanaprasith and Ann Chotika Chevasuttho, who also run Georgetown’s iThai restaurant, and the Side Street & Sushi Bar by iThai in Vienna.

Their new restaurant will be able to seat 48 people, according to permits.

Staff said Thai Select will serve a variety of Thai dishes and bubble tea. The latter may compete with the bubble tea served next door at frozen yogurt shop IceBerry.

Thai Select will replace the create-your-own sushi eatery Rolls By U that closed in December after opening in the shopping center in 2015. Its sister location in Foggy Bottom which opened in 2017 also appears to be closed. The Rolls By U owners’ other venture, Guarapo Lounge in Courthouse, closed in 2016.