In a shocking playoff game, Toronto Raptors star Kawhi Leonard won the series against the 76ers with a buzzer-beating three-point shot.

The tense moment of the ball bouncing precariously around the rim of the basket kept viewers glued to their screens and sharing the moment across social media.

Within moments, Ballston-based company BreakingT was turning it into a t-shirt. 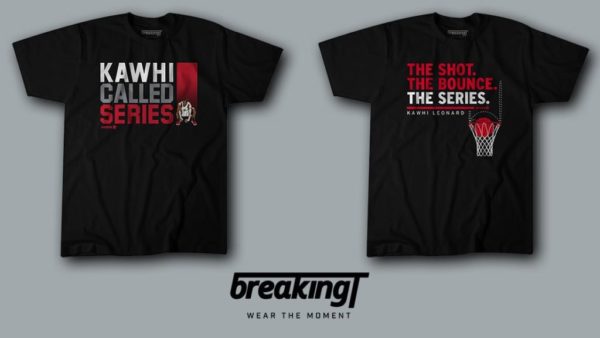 “The sports fan apparel market is a massive market,” Welsh said. “You can look it up, it’s between $25-$30 billion globally. It’s a global industry. We have found with our data-driven, real-time approach that there’s absolutely a demand.”

The company recently celebrated its five-year anniversary and Welsh has ambitions to keep growing. The company raised $400,000 in angel investments in 2017 and hired its first full-time employee. Now, Welsh said his goal is to raise $2 million to expand licensing and marketing.

“One of our biggest corporate objectives is to make our service and company indispensable,” Welsh said. “We have deals now with 30 pro sports teams. They see the value in what we do — the social value in these big moments.”

Welsh said the NBA playoffs have been a big focus lately. The group has a license from the NBA Players Association that allows them to make official merchandise.

“We’re looking for the very specific moments in these games and what the fans are talking about,” Welsh said. “When he shot the ball at the buzzard, the basketball bounced four times on the rim before it went in. Everybody was holding their breath. It was a massive moment for Toronto fans.”

Welsh said the company’s proximity to D.C. let it build a relationship with the Washington Nationals, which Welsh credits for helping to put BreakingT on the map. From there, the company was able to expand into partnerships in other locations and sports, like a partnership with the Carolina Hurricanes.

Welsh said one of his favorite sports moments captured on BreakingT apparel was when a team leaned into being called a “bunch of jerks.”

“A sports broadcaster called the [Carolina] Hurricanes players a bunch of jerks because they started doing choreographed celebrations on the ice,” Welsh said. “It was breaking with the tradition of hockey, but fans loved it. Our social data monitors were going off about this moment. The team leaned into that, and that’s been one of our biggest hits of all time. We sold over 20,000 units of that one shirt.”