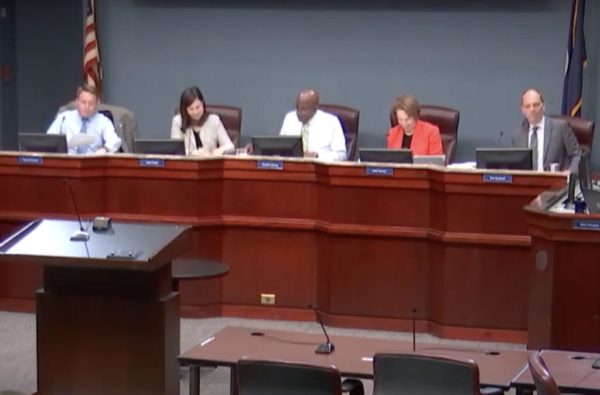 The Arlington County Board members voted last night to give themselves the ability to raise their pay by more than 50% next year.

Currently, Board members are paid $55,147 annually while the Board Chair is paid $60,662. Board members set a salary cap for their jobs every four years and last night voted for a significant hike.

The Board voted to “set the new cap at 100 percent of the Individual Area Median Income for the Greater Washington Region, or $89,851 for a Board Member and $95,734 for the Board Chair.” The new salary cap will take effect Jan. 1, 2020, but the Board has to take a separate vote to actually set their salaries.

“It is important to underscore that the Board’s action today sets a new salary cap, but does not increase Board salaries,” County Board Chair Christian Dorsey said. “The Board will not consider an increase in salaries in this calendar year, and whether we consider an increase in our salaries in 2020 will depend greatly on the overall outlook for the Fiscal Year 2021 Budget. “While it is awkward for the Board to have to vote to increase its own maximum salaries, state law leaves that responsibility to the Board,” Dorsey said. “We have not voted to increase the salary cap since 2011, and if we did not do so today, we would not be able to, under state law, for four more years. I support increasing the salary cap because I believe it will encourage more people, from varied economic backgrounds, to think about serving on this Board.”

Under state law, the Board may set a new maximum salary only once every four years, when 40 percent of the Board (two members) are standing for election. Dorsey and Board Member Katie Cristol are both up for re-election in November 2019. Any increase in salaries under the new cap would require separate Board action.

Board members, in their discussion of the proposed salary cap increase, noted that Board salaries are below the average salaries of jurisdictional comparators, and currently are at the level of 64.9 percent of Individual AMI for the Washington-Arlington-Alexandria Metro Area for a Board Member.

The Board heard from 223 people who took an online survey that asked respondents to indicate what salary level they thought was appropriate for members of the County Board and provide comments on the Board’s consideration of setting a new salary cap. The Board also received messages from more than three dozen residents on the proposed increase in the salary cap. The Chair sent letters to every civic association in the County, and community organizations, seeking their input through the online survey, and the County included a link to the survey in “Inside Arlington,” the County’s weekly e-newsletter, which has 135,000 subscribers.

The Board was considering setting the cap even higher — up to $135,312 for the chair, commensurate with the area median income for a family of four.

Arguments in favor of a pay raise for the County Board center around the belief that being a Board member for a prosperous county of 230,000 residents has become a full-time job, even if the position is technically considered part time. Being a County Board member, proponents argue, shouldn’t just be an option for the well heeled, and even a $90,000 salary isn’t high for leaders of a county with a $1.4 billion budget.

Arguments against the pay raise mostly assert that the Board has willfully made their jobs full time, when really it should function as more of a part-time, decision-making body supported by full-time county staff.

What do you think of the pay raise?