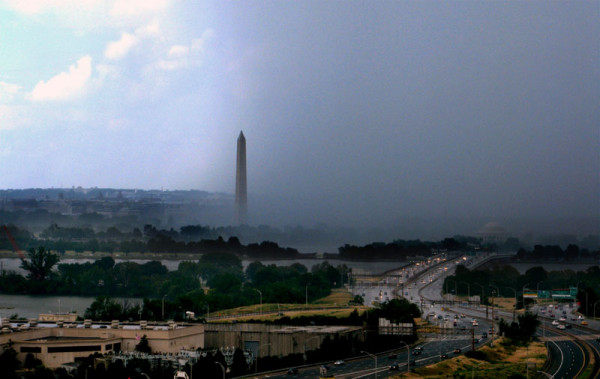 It’s shaping up to be a wet Sunday night.

Arlington County and surrounding areas are under a Flash Flood Watch starting at 6 p.m. Slow-moving rainstorms are expected to drop copious amounts of precipitation on much of the region, particularly to the west of D.C.

The expected downpours follow the strong storms that ripped through Arlington yesterday, dumping torrential rain on much of the county and saturating the ground. That combination could result in flooding.

…FLASH FLOOD WATCH IN EFFECT FROM 6 PM EDT THIS EVENING THROUGH LATE TONIGHT… SLOW MOVING SHOWERS AND THUNDERSTORMS ARE EXPECTED TONIGHT. TORRENTIAL RAINFALL MAY LEAD TO TOTALS EXCEEDING 2 INCHES IN A SHORT PERIOD OF TIME. THIS MAY CAUSE FLASH FLOODING OF SMALL STREAMS AND OTHER POOR DRAINAGE URBAN AREAS. PRECAUTIONARY/PREPAREDNESS ACTIONS… A FLASH FLOOD WATCH MEANS THAT CONDITIONS MAY DEVELOP THAT LEAD TO FLASH FLOODING. FLASH FLOODING IS A VERY DANGEROUS SITUATION. YOU SHOULD MONITOR LATER FORECASTS AND BE PREPARED TO TAKE ACTION SHOULD FLASH FLOOD WARNINGS BE ISSUED. &&

The Flash Flood Watch has been expended to include eastern WV including the Panhandle, most of MD, and all of northern/central VA. The Watch is in effect until late tonight. #DCwx #MDwx #VAwx #WVwx pic.twitter.com/yshq6k5UGQ