Residents of Arlington will have a number of chances to weigh in on the next steps for the Ballston Harris Teeter redevelopment.

The Arlington County Board unanimously approved scheduling a public hearing related to developer Southeastern’s request to rebuild the grocery store as a ground-floor retail space with five stories of apartments up top — as well as build a second, eight-story apartment building next to it and a half-acre public park.

The upcoming hearing by the county’s Planning Commission is one of several planned to review the project.

A meeting of the Site Plan Review Committee next week will allow residents to learn more about Southeastern’s request to rezone a portion of the land slated for the site as well as view updated renderings. It will be held this upcoming Monday, July 22, from 7-9:30 p.m.

On Tuesday, July 23, the public can attend an open house from 5-6:30 p.m. to ask more questions, particularly about the project’s proposed public spaces, and view the latest project renderings.

Both meetings will be held at county government headquarters, at 2100 Clarendon Blvd in Courthouse.

The @HarrisTeeter at 600 N Glebe Rd. is being redeveloped to become a mixed-use project with new flagship-level Harris Teeter, retail space, apartment units and public space. See the design concepts at an open house on July 23: https://t.co/snllhiizVz pic.twitter.com/F8BpdwMLrV

Southeastern wants to up-zone the land near N. Thomas Street, which is is currently zoned for “Low-Medium” residential buildings, which would otherwise put a damper on the developer’s plans to build 732 units and include retail space in the buildings.

County Board members approved the request to advertise the public meeting during their meeting this past weekend. 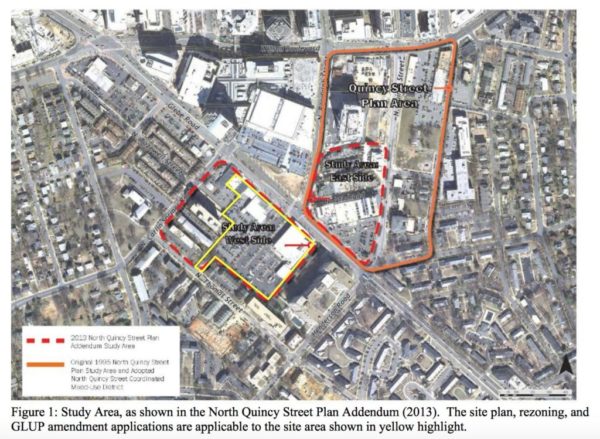 “The proposed development will provide a new, top of the line Harris Teeter grocery store with upgraded features and offerings,” an April letter from the developer noted. “It will also provide additional, much needed housing close to the Ballston Metro station and the Ballston Quarter project.”

Five years ago, the County Board approved changes to increase density on the site, taking into account the neighborhood’s development along Wilson Blvd.

At the time, Board members said they hoped N. Glebe Road could become an “urban boulevard.”