Most people using Amazon won’t browse past the first page of listings for any given search or category. That’s where newly-Arlington-based startup Amify comes in.

Amify doesn’t sell products. Rather, the company works with other brands to help them drive sales and maximize their revenue on Amazon.

“Much like a brand might outsource PR to a PR firm, brands can outsource their Amazon presence to Amify,” Amify CEO and founder Ethan McAfee said in an email. “We can usually do it a lot better and a lot cheaper than a brand can do it internally. A few brands we work with include Fender Guitars and Pacers Running.”

Now with Amazon setting up its new HQ2 in Arlington, Amify has uprooted from its Alexandria headquarters and relocated closer to the company it is intrinsically tied to.

McAfee said Crystal City has historically been viewed as a “boring concrete jungle filled with government agencies and contractors,” but that Amazon’s move will help to change that.

“We moved there to be ahead of the curve,” McAfee said. “In a few short years, the number of fun and modern restaurants and bars will increase and make National Landing” — the name for the combined Crystal City, Pentagon City and Potomac Yard neighborhoods along the Blue and Yellow lines — “a much more attractive place to have an office.” 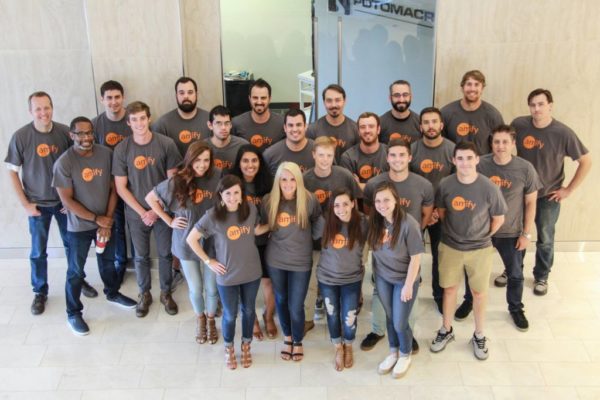 McAfee said the two Metro lines, airport, VRE and highway access also make Crystal City an attractive spot for Amify. It doesn’t hurt that McAfee said the largest pool of talent for people with Amazon knowledge will be centered around the new headquarters. Like a remora fish swimming alongside a shark, it’s a symbiotic relationship that can hopefully keep Amify well-fed on business in Amazon’s waters.

“Wherever Amazon goes, it’s going to generate some sort of regional brain trust or community that somehow relates to its business,” said McAfee. “We want to be a part of that brain trust. We want to be around smart people who work or who have worked for Amazon, and are passionate about selling online and advancing the experience of sellers on the platform. It’s an excellent environment to be in if you’re a business like ours.”

Things have been going well recently. McAfee said Amazon’s reported decision to retire a large number of its first-party seller relationships — ditching some small brands that sell their own products to Amazon via purchase order, in favor of third-party marketplace sellers that stock and sell goods via Amazon’s platform — has left some of those brands reeling and trying to reclaim their Amazon presence.

But like the remora fish, McAfee said sometimes Amify can very much be at the whims of the larger beast.

“Much like Walmart, Amazon is a very large retailer and can throw around its weight,” McAfee said. “It certainly makes sellers’ lives more difficult, but at the same time, no other platform is going to provide sellers with the same exposure or access to consumers as Amazon.”

“Given control of the largest online marketplace in the world, it’s conceivable one might tip the scales in their favor,” McAfee continued. “This is not to give Amazon a pass, it’s just to say that this is something we’ve anticipated and therefore can respond to in the context of how it impacts our customers.”

Despite that uncertainty, McAfee said relocating closer to HQ2 should help put the company on more stable ground.

“Being closer to Amazon will be an opportunity for us to grow our company by solidifying our place as Amazon’s top brand partner and attract new talent by being one of the first companies on the ground of this growing tech hub,” he said.