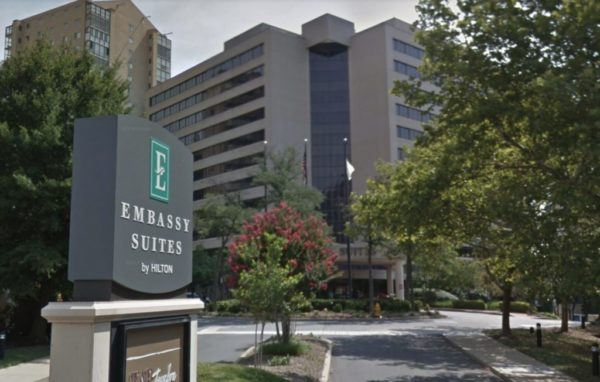 Tebebe Makonnen, charged with murder after a woman’s death at the Embassy Suites in Crystal City, avoided a lengthy jail sentence on a previous charge thanks to a plea deal earlier this year.

The victim, who fell from an upper floor of the hotel onto the interior lobby restaurant below around 1:30 a.m. Tuesday, was identified as Makonnen’s mother, multiple news outlets reported. According to WUSA 9, Makonnen and his mother, 63-year-old Zelalem Abedje, were living in the hotel.

Makonnen was arraigned Wednesday morning before Judge George Varoutsos in the Juvenile & Domestic Relations District Court, prosecutors say. He’s due back in court for a preliminary hearing on Wednesday, Sept. 18.

In January, Makonnen struck a plea deal with prosecutors in connection to an incident last year, in which he was accused of inappropriately touching an employee at Virginia Hospital Center’s Behavioral Health Unit. The original charge of sexual battery was downgraded to disorderly conduct, and a Circuit Court judge agreed to a recommended 12-month jail sentence, with the entire sentence suspended — making Makonnen a free man, on the condition of treatment for mental health issues.

“The Commonwealth felt it was important that mental health treatment be a component of any disposition in the Circuit Court,” outgoing Arlington Commonwealth’s Attorney Theo Stamos told ARLnow.

Our office agreed to amend the sexual battery to disorderly conduct (also a Class 1 misdemeanor) with an agreed recommendation of 12 months in jail, all suspended for one year, with the added conditions that the defendant remain compliant with his mental health treatment under the supervision of [Arlington’s Dept. of Human Services] as well as refrain from any contact with the victim. Judge Louise DiMatteo ordered the defendant to return to court on January 10, 2020 to review his compliance. Defense counsel made a strong argument that the amendment to disorderly conduct would allow the defendant to avail himself of a broader range of treatment options as programs often don’t allow individuals with sex-related convictions in their programs.

However, in a video posted in March 2018 (below), two months before the Virginia Hospital Center incident, Makonnen talks into a camera and argues that antipsychotic medication has ruined his life.

Makonnen says in the video that he was diagnosed with schizophrenia and bipolar, but asserts that he was not experiencing any symptoms. He says forced hospitalization is “ridiculous,” the medication he was given “would make me a zombie,” and forced medication is an “injustice.”

Stamos and Savage declined to comment further on the pending murder charge. In addition to murder, Arlington Circuit Court records indicate Makonnen is also being charged with disobeying a court order.