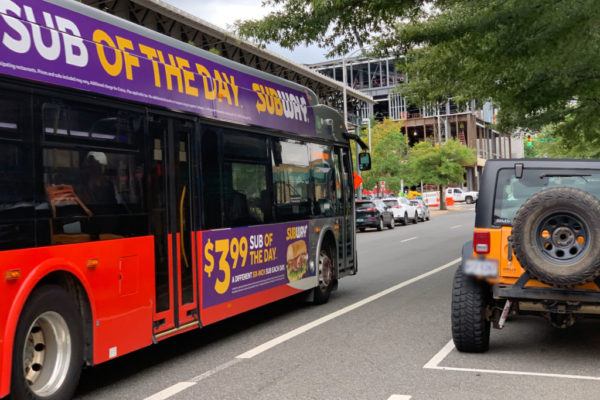 (Updated on 09/09/19) A Metrobus with a chemical leak that caused first responders to hospitalize the driver last week sickened a second driver after being placed back in service prematurely, union officials say.

“I proceeded on to 395 taking the Seminary Road exit to the HOV. As I proceeded that’s when the smell got stronger,” wrote the driver in a statement obtained by ARLnow. “As I am nearing the Pentagon, the smell continues to get stronger and a passenger begins coughing.”

The driver reported that passengers ran off the bus at Pentagon due to the “awful smell” and that she had a headache and was feeling a pain in her chest. When first responders arrived, she wrote, “I tried to explain the situation and then passed out.”

First responders said at the time they didn’t find anything hazardous on the bus, but did transport the driver to Virginia Hospital Center. A Metro spokesperson told ARLnow that they were not aware of a second problem after the morning incident.

“The bus was immediately shut off and taken out of service,” said WMATA spokeswoman Sherri Ly. “Upon inspection, an exhaust leak was identified and repairs made before the bus returned to service that evening. Metro did not receive any additional complaints that night and no further health issues have been substantiated.”

“When leaving the yard I was coughing hard off fumes, and during the route passengers were also coughing,” the second driver said, according to a copy of the report obtained by ARLnow. (On Monday, a WMATA spokeswoman said they had not received a copy of the report.)

Union spokesman Brian Wivell said the afternoon driver is seeing a doctor and the morning driver visited the hospital again Monday for “follow-up work.” Another union representative said the morning driver “wasn’t in good condition at all” on Thursday and Friday and remained out of work Monday.

“We demand that Transdev respond to the safety concerns of its workers,” ATU Local 689 President Raymond Jackson said of the French company, to which Metro outsourced the management of the garage last year.

The union, which also bid on the contract, disputed Metro’s assertion that the garage contract saved money, and accused the transit agency of union busting. Since then, ATU has been locked in a bitter battle with Transdev over pay and working conditions, which recently boiled as members voted to authorize a strike.

“They’ve been raising alarm bells for months, flagging buses that have issues, and now a worker has gone to the hospital,” Jackson said of the Lorton garage. “This is the human cost of this company’s profits.”

Next
‘Barry’s Bootcamp’ Coming to Clarendon by Year’s End