Part of my job is to constantly find new beers to stock.

I like those beers, of course, but occasionally a beer comes along that really gets me. This happened recently with the new Black Rice Ale from Anderson Valley Brewing Company. At only 3.8% ABV, it ticks the “session” box; as a year-round, it ticks the “if you make something good, make it available all the time” box; it’s tasty as hell, so it ticks the “tasty as hell” box.

There’s only so much information online about Black Rice Ale, so I asked our local AVBC rep if he had anything else to pass along. What he did was put me in touch with Fal Allen, AVBC’s brewmaster since 2000 and an industry veteran who started his pro career at Redhook in 1988. Yes, I was excited to chat.

Allen told me he had tried Chinese black rice, aka Forbidden or Emperor’s rice, in a dish. “I had no idea what it was but the rich nutty flavor was compelling. I immediately thought that it would work well in a beer.” AVBC’s site describes Black Rice as a Nut Brown, in fact.

I asked Allen if the intent actually was to make a Nut Brown or if they were searching for a style to suit the black rice. “It was really a matter of finding a style that the beer fit into,” he responded, adding “it is not really a nut brown ale but people want to know what it is like… we thought that it was closest to a nut brown ale.”

Allen noted they could also have compared it to Schwarzbier, but being neither German in style, nor a Lager ruled that out “although the beer certainly tastes like a schwartz bier.” 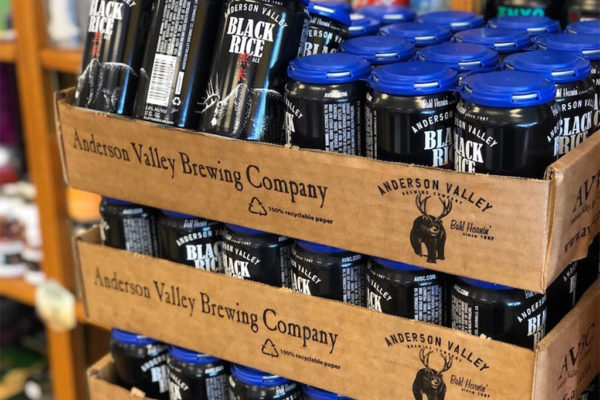 This hit on what, to me, is probably the most intriguing aspect of Black Rice Ale — how it melds roasty flavors of Black Ales and Lagers with the nuttier tones of American and English Browns. I wondered what the black rice actually brought to the beer besides being a cool ingredient to throw in the mash. Allen said the rice gives the beer its “delicious dark color,” and “a nice nutty flavor,” and doesn’t think it contributed anything to the beer’s aroma.

Remembering how the 2014 release of AVBC’s Gose sparked a new era for the brewery (and for Sour Ales in America in general), and noticing that Black Rice arrives at the same time as the brewery’s Barrel-Aged Stouts and Porters moving from bombers to cans and the introduction of its new Hibiscus Rozelle, I asked Allen if we were seeing another instance of Anderson Valley not quite reinventing itself, but refocusing.

“I agree it does feel a little like that, but I think it was more to do with a change in attitude,” he explained. “We are not trying to reinvent ourselves so much as we are trying to get our products out to market a little better.” The unpainted cans AVBC uses allows them to more quickly take what may be initially a draft-only offering and get it out to a wider audience if the response is good.

With bottle sales way down and cans on the rise on the East Coast, that promises more cool AVBC beers on the horizon. For now, check out Black Rice Ale if you see it around.