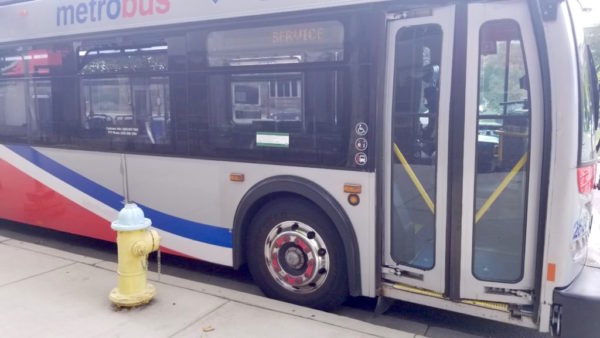 (Updated at 5:25 p.m.) The Arlington County Fire Department is urging Metro to keep its Metrobuses from blocking fire hydrants in Pentagon City.

Blocking fire hydrants carries a $50 penalty in Virginia because getting around vehicles can delay firefighters in an emergency, as well as make it harder to ferry water to the fire.

“The best way to get water to a fire is a straight line from the hose,” Statter told ARLnow. “When it being blocked the pumper can’t get a good angle to the hydrant, or get can’t get to the hydrant.”

In response to Statter’s dogged chronicling of blocked hydrants, ACFD replied on Friday that “we are working with WMATA to address this issue of unattended buses in front of hydrants. Our Fire Marshals will be stepping up patrol and enforcement.”

ACFD spokesman Capt. Justin Tirelli told ARLnow today (Tuesday) that one of the hydrants was scheduled to be removed but was delayed due to construction. In the meantime, he said the fire department gave Metro permission for Metrobuses to load and unload passengers at the stop — provided the buses don’t stop in front of the hydrant for too long.

“At some point that message got lost in translations,” Tirelli noted.

“The worst part of today’s blocked hydrant was when the bus finally pulled away after at least 20 minutes,” he wrote. “The electronic sign showed the mission it was on — ‘Driver Training.'”

(4) But it wasn't just one supervisor's SUV there. There were two parked on Hayes Street with the bus that blocked a hydrant for at least 20-minutes. #metrosafetyfail pic.twitter.com/H9mDMXvPRt

“This policy is being reiterated to every Metrobus operator, and field supervisors are increasing their focus on Pentagon City to ensure proper procedures are being followed in bus layover areas,” said Jannetta in an email Tuesday afternoon. “Metro’s bus operators are trained and expected to comply with all traffic laws. We appreciate this matter being brought to our attention to ensure everyone’s safety.”

Statter also tweeted out a video of an out of service bus parked at the hydrant for 10 minutes back in August, writing that, “WMATA workers need breaks. They need to pee. They need to eat. But it shouldn’t be at the expense of safety.”

At the time, a spokeswoman for the transit agency told the Washington Post that its drivers should not be parking in front of hydrants.

“At bus terminals, operators are expected to use the proper layover bay and at no time should buses block fire hydrants,” spokeswoman Sherri Ly said. “If someone does see this we would ask that they report it.”