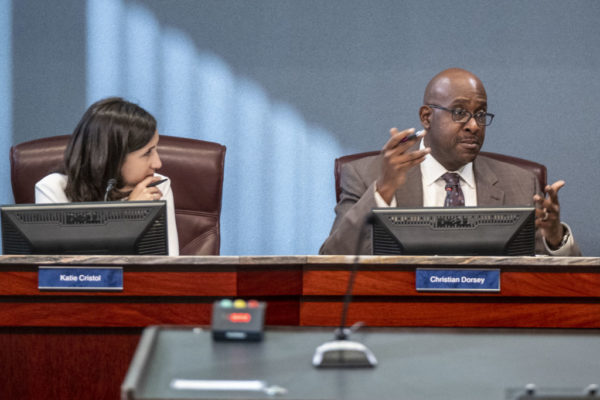 Arlington will soon be studying how to factor racial equity in policymaking thanks to a new resolution passed this weekend.

The Arlington County Board unanimously adopted a resolution its meeting this past Saturday, September 21, committing the county to gathering data on racial inequality in Arlington, creating a “scorecard” to track progress made, and designing a tool to help officials consider race during policy and budget decisions, among other actions.

The three-page resolution is part of the county’s participation in a training program with the Metropolitan Washington Council of Governments (MWCOG) and the Government Alliance on Race and Equity (GARE), a national racial justice organization from University of California Berkeley’s racial justice institute and activist organization Race Forward.

As part of the the nine-month program, county officials will design the racial equity tool for policymaking, aimed at improving currently unequal policy outcomes based on race.

“Arlington County has achieved great success in attaining ‘secure, attractive, residential and commercial neighborhoods’ with engaged citizenry and resilient, sustainable communities, but recognizes this is not the experience of all Arlingtonians,” reads the Saturday resolution.

County Board Chair Christian Dorsey said that many “grassroots” efforts have existed in Arlington to address racism and unequal access to resources, but that’s an imperfect system.

“We weren’t hitting everything,” he said. “It was not comprehensive.”

“The pervasiveness and the systemic nature of inequity in our society means you can’t pick and choose where you want to make a difference,” added Dorsey. “You have to actually make that difference enterprise-wide, community-wide.”

Board member Katie Cristol praised county staff for their work on the project, and said staff buy-in was essential because everything local government does from “filling pop-holes to renewing library books” touches themes of racial equity.

Officials noted during the weekend discussion that the commitment to equity is designed to build on the county’s existing equality initiatives dedicated to housing, health, childcare, and internet access. Research previously found a 10-year life expectancy gap between some Arlington residents depending on where they live and that students of color faced higher rates of obesity, teen pregnancy, and lower rates of care for mental health.

“Simply put, it’s about meeting people where they are,” Assistant County Manager Samia Byrd said of the new initiative. “And beginning to open doors to provide access to pathways that have been traditionally or systematically blocked.”

Byrd said Arlington will assemble an interdepartmental task force to address racial inequities that will include Arlington Public Schools, which has faced accusations of racial bias in student discipline, and settled a lawsuit with the Department of Justice over inadequate support for English-language learning students.

“The vast majority of our history is one where government has played a role in creating and maintaining racial inequities,” said GARE Director Julie Nelson. “And so for us it’s really important for us to recognize what our vision is, and what our values are, and to act accordingly.”

GARE currently works with local governments in around 40 states, including Virginia and Maryland, according to its website.

“The current paradigm is challenging the premise of equality and instead considering equity,” Byrd noted.

“Frankly this is a step forward for the families that [the Arlington Food Assistance Center] serves,” said AFAC’s Executive Director and CEO Charles Meng.

“This isn’t about feeling good,” said Board member Libby Garvey. “It’s about making it better for everybody.”