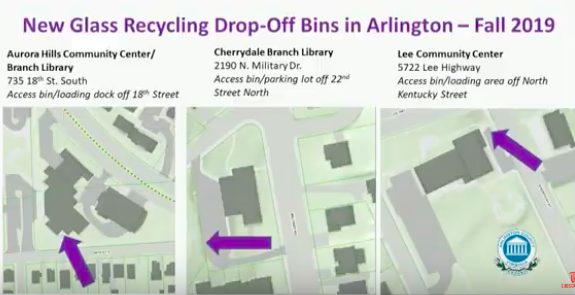 Arlington County is adding three new places to drop off glass for recycling, and more are potentially on the way.

With glass off the curbside recycling list, Arlington residents have been flocking to the county’s two existing glass drop-off sites at Quincy Park and the Arlington Trades Center, going out of their way to recycle more than 200 tons of glass since this spring.

Officials have been working to add more sites, to make drop-offs more convenient for those who don’t want to throw away glass bottles in the trash. At Tuesday afternoon’s County Board meeting, three new sites were announced.

“Those customized purple and green containers will be added to Aurora Hills Community Center, another site at the Cherrydale Branch Library, and a third one at the Lee Community Center,” said County Manager Mark Schwartz, adding that the new roll-off bins “should appear over the next two weeks.”

County Board Chair Christian Dorsey said during the meeting that “a few more” sites were needed, particularly in southern and central Arlington. More sites will come in time, Schwartz assured him.

County Board member Libby Garvey asked about the fact that the only way to deposit glass is via a few round holes in the side of the bins.

“People have to go bottle by bottle and they’ve found it frustrating to go slowly,” she said.

Schwartz explained that glass containers larger than bottles tend to cause problems in the recycling stream.

“Those holes are sized as they are — our analysis has shown that the larger containers of glass tend to be not as clean and pristine, people don’t spend time to clean them out,” Schwartz said. “Second, if you put those glass containers in, you’ll hear shattering… [the] holes are sized so that the glass doesn’t come back up.”

Glass dropped off at the bins is recycled and reused locally — sent to Fairfax County to be “crushed and turned into sand and gravel for use in paving, construction and landscaping,” according to Arlington County.