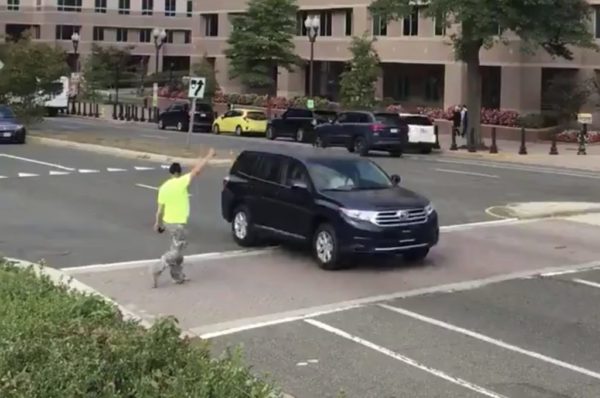 Sometimes, however, the Type A-ness that helps make Arlington Arlington produces negative side effects. A prime example one might cite? More-impatient-than-average drivers.

That was on display this morning (Thursday) as Arlington County Police conducted another high-visibility pedestrian enforcement campaign near the FDIC offices in Virginia Square.

Video posted by ACPD shows an undercover police officer, wearing a brightly-colored t-shirt, walking across Fairfax Drive at N. Kansas Street in a crosswalk as two vehicles approach. Neither stop nor appear to slow down, narrowly missing the officer, who then signals for each to be pulled over and cited.

The law, however, requires drivers to yield to pedestrians in such cases.

In all, 25 summonses for Failure to Yield to a Pedestrian in the Crosswalk were issued this morning during the enforcement action, police said.

“Remember that the streets don’t belong to any one of us, they belong to all of us,” police said in a tweet shortly after the campaign concluded. “Share our roadways with all travelers by being a PAL: Predictable | Alert | Lawful.”

Remember that the streets don't belong to any one of us, they belong to all of us. Share our roadways with all travelers by being a PAL: Predictable | Alert | Lawful.