The county has kicked off its four-block traffic calming project along N. Stafford Street, north of Washington-Liberty High School.

The project, between Lee Highway and 15th Street N. in Cherrydale, is part of the county’s “Neighborhood Complete Streets” program.

A key feature of the project is the implementation of a “chicane,” or curved design, on the street. The Institute of Transportation Engineers suggests curving a street slows traffic by forcing drivers to “steer back and forth instead of traveling a straight path.”

The traffic calming is necessary because the current road design allows drivers to speed down it.

“The existing roadway is long and straight, has a lot of topography which creates a lot of slope, and these are characteristics of the road that allow vehicles to pick up speed,” said an Arlington Dept. of Environmental Services (DES) official at a recent meeting about the project.

The official noted that observed speeds on the road were not enough to justify “vertical” traffic calming measures like speed bumps, but did call for something “less obtrusive,” like the chicane.

The county is planning to remove remove three to five parking spaces to make room for the chicane changes.

The project includes other upgrades and changes.

Crews could be seen yesterday (Thursday) replacing the stop signs at the intersection of N. Stafford Street and Lee Highway. One worker noted the sign was “rusty and outdated,” and the replacement sign would have “better reflectivity so drivers know to stop.”

The traffic-calming project is intended to: 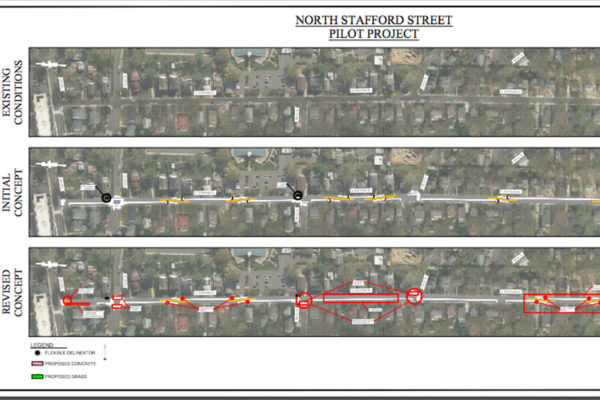 Arlington officials picked N. Stafford Street for the project after asking for public nomination of dangerous streets across the county. According to the project page, it was the “top ranked street from the first round of [Complete Streets] applications.”

A spokeswoman for the Arlington County Police Department said police have not recorded any crash at the intersection of N. Stafford Street between Lee Highway in the last four years.

The N. Stafford Street improvements are being considered a pilot project. County staff will observe and measure conditions on the street for at least one year, per the project website.

The project will cost an estimated $20,000 for striping, signage, and concrete work. Funding was allocated in the county’s FY 2019-28 Capital Improvement Plan.