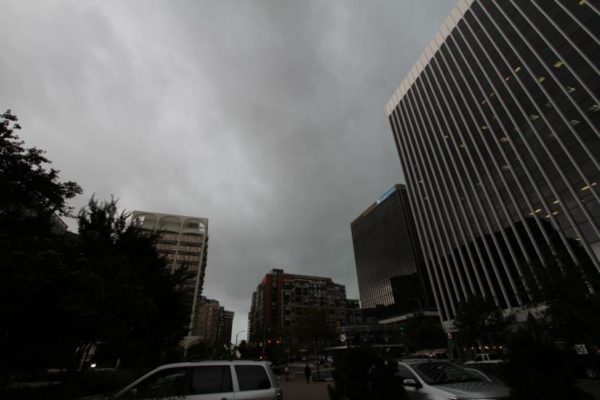 A Tornado Watch has been issued for Arlington and the D.C. region as severe storms threaten dangerous conditions amid tonight’s Halloween festivities.

The Tornado Watch is in effect until midnight.

Forecasters warn that a line of storms packing rain and gusty winds will reach Arlington around 9 p.m. Trick-or-treaters and Halloween partiers should seek shelter ahead of the storms.

The National Weather Service issued a special statement about the storm threat:

A LINE OF THUNDERSTORMS IS EXPECTED TO MOVE EAST ACROSS THE REGION. THESE STORMS WILL BRING THE POSSIBILITY OF DAMAGING WIND  GUSTS AND ISOLATED TORNADOES. PLEASE BE SHELTERED WHEN THESE  THUNDERSTORMS PASS THROUGH YOUR AREA.

THE MOST LIKELY TIMING OF THE LINE RANGES FROM MID TO LATE AFTERNOON FOR THE POTOMAC HIGHLANDS, TO THE EVENING FOR THE BALTIMORE/WASHINGTON METROS, TO BETWEEN 9PM AND MIDNIGHT FOR AREAS EAST OF I-95 TO THE CHESAPEAKE BAY. THE STORMS WILL LIKELY LAST AN HOUR OR LESS IN MOST AREAS.

STAY INFORMED. FOR MORE EXACT TIMING FOR YOUR LOCATION, CONSULT THE FORECAST FOR YOUR COMMUNITY AT OUR WEBSITE WEATHER.GOV OR OUR FACEBOOK OR TWITTER FEEDS FOR NATIONAL WEATHER SERVICE BALTIMORE/WASHINGTON.

A tornado watch has been issued for parts of northern west Virginia, northern Virginia, the District of Columbia, Maryland west of the Chesapeake Bay, and much of central Pennsylvania until midnight. pic.twitter.com/wsdXvyzvyu

The threat in increasing for severe thunderstorms including a few tornadoes this afternoon and evening. In addition to the thunderstorms, strong winds are expected ahead of and behind the storm into Friday, especially across the Great Lakes and Appalachians, into the Northeast. pic.twitter.com/pb2585dhTl

Here's a computer model projection of what the radar may look like as the storms approach DC, showing a squall line with a few discrete storms — possibly supercells with a tornado threat — out ahead of it. 5/ pic.twitter.com/2bpPqj6b7n