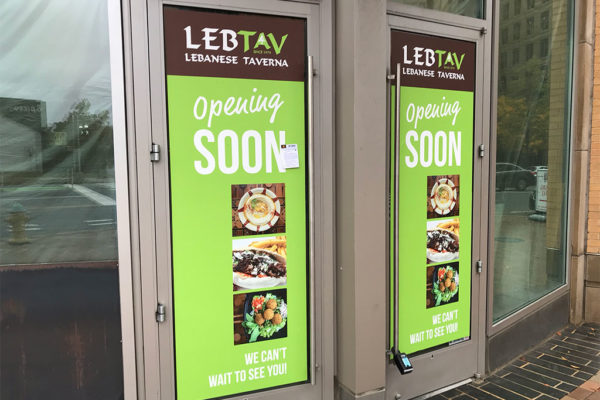 Lebanese Taverna is hoping to open its “LebTav” fast-casual concept later this month in Ballston.

It’s part of a new expansion push by the Arlington-based local chain, which includes a new location that’s planned to open in the Pentagon late next year.

As previously reported, the new restaurant in Ballston will be located in the former Taylor Gourmet space at the corner of Wilson Blvd and N. Quincy Street. Signs are up on the doors, the windows are covered and construction is still underway inside.

LebTav offers a smaller but similar menu to the full-service restaurants, and existing locations in Rockville and Silver Spring, and is opening another in a former Taylor Gourmet space in D.C. A PR rep tells ARLnow that the Ballston location is expected to open at some point in November.

A press release from commercial real estate firm KLNB, below, notes that Lebanese Taverna currently has a dozen locations in the D.C. area.

KLNB, the leading mid-Atlantic multi-service commercial real estate firm, has announced that Lebanese Taverna will open three new “LebTav” fast-casual concept locations within the next two years: Ballston in fall 2019, K Street in early 2020, and inside the Pentagon in late 2020, in addition to the recently opened Farragut Square location on 17th Street in D.C.

Founded in 1979, the Lebanese Taverna Group currently owns and operates 12 locations around the Washington, D.C. Metro area, and has been recognized by numerous media outlets and publications as having the region’s best Mediterranean cuisine. KLNB has worked with Lebanese Taverna since the opening of its first location and has helped the restaurant group open all subsequent locations. The restaurant group is family-owned and operated.

Recently, Lebanese Taverna has evolved to adapt to their customers’ changing tastes and needs. “The new LebTav brand and fast-casual concept is a response to these changing consumer trends,” said Combs. “For savvy business owners like Lebanese Taverna, that meant launching a new concept in target markets around the region. From a real estate perspective, it was critical to the business plan that we work with the owners to find unique spaces that reduced the restaurant group’s footprint and aligned with the fast-casual atmosphere they wanted to cultivate.”

Last year, Lebanese Taverna rebranded three of their locations in Annapolis, Congressional Plaza Rockville, and Downtown Silver Spring to “Lebanese Taverna Cafes”. In each case, KLNB helped Lebanese Taverna find and move the restaurant to another space within the existing shopping center, cutting down their square footage.

“We want to grow and change with our customers. LebTav is a refinement of what has been successful in the past. We took the greatest hits of our traditional menu and utilized smaller retail space paired with a fresh design to cater to our busy customers,” said Grace Abi-Najm Shea, Executive Vice President, Lebanese Taverna Group. “KLNB helped us bring this new concept to life. As a restaurant owner, the space in which you operate is critical to your business. KLNB has grown with us and we look forward to many more successful years to come.”

END_OF_DOCUMENT_TOKEN_TO_BE_REPLACED

More Stories
Op-ed: What I Believe In, By Parisa Dehghani-TaftiOpen Houses in Arlington This Weekend