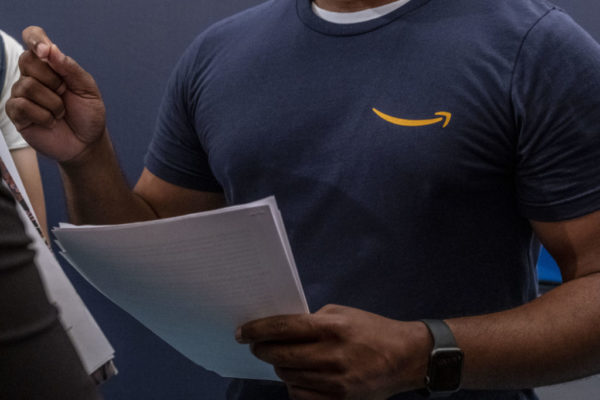 Amazon is now listing more than 300 open positions in Arlington on its jobs website.

After hovering in the double digits for much of the year since hiring began in April, the number has been quickly increasing, though it includes both jobs at Amazon’s new, temporary HQ2 in Crystal City and at an existing office in Ballston.

The top job categories listed are mostly technical in nature, including:

Amazon has repeatedly said it is hoping to hire 400 people to work at its new headquarters by the end of the year. There seems to be no shortage of interest — thousands attended an Amazon job fair in September and a poll found that three-quarters of IT workers in the region would consider jumping ship to Amazon.

The Amazon jobs website says the tech giant is “looking to foster a sense of place for our teams and community residents” at HQ2. The website encourages applicants to “come build the future with us.”

Amazon selected Arlington, Virginia as the location for its second headquarters. Amazon will invest $2.5 billion dollars, occupy 4 million square feet of energy efficient office space, and create at least 25,000 new full-time jobs. Our employees and the neighboring community will also benefit from the associated investments from the Commonwealth including infrastructure updates, public transportation improvements, and new access to Reagan National Airport.

By working together on behalf of our customers, we are building the future one innovative product, service, and idea at a time. Are you ready to embrace the challenge? Come build the future with us.

END_OF_DOCUMENT_TOKEN_TO_BE_REPLACED

More Stories
Morning NotesOp-ed: What I Believe In, By Parisa Dehghani-Tafti