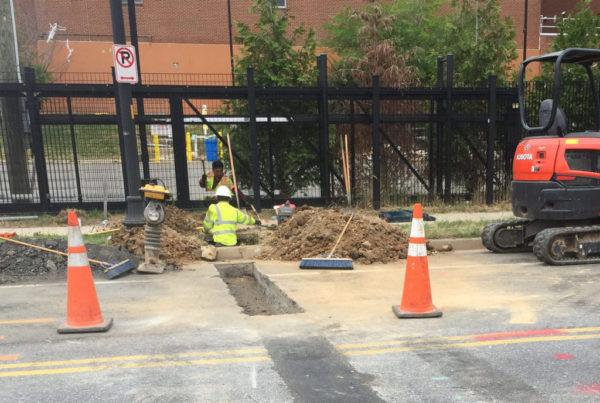 Amazon and JBG Smith could one day brush off the dust on Arlington’s long-underused dark fiber network.

The Arlington County Board was scheduled to vote on issuing a non-disclosure agreement (NDA) for the tech giant and developer to discuss the “ConnectArtlington” network during its meeting this Saturday, November 16.

The network currently provides internet service to many county buildings, but was once promised to be a way for local businesses and organizations to also access access high-speed internet at faster speeds and cheaper rates than available from larger commercial providers like Verizon.

“The purpose of this item is to discuss the County’s Fiber Optic Network ‘ConnectArlington’,” said Jack Belcher, the county’s chief information officer, when asked for more information about the County Board item.

“An NDA is necessary as the fiber network and its location is considered critical infrastructure of the County,” he added.

Arlington previously spent $4.1 million building the 10-mile underground cable network. But in February, an ARLnow investigation revealed that almost no businesses were able to license the network due to “flawed” legal requirements.

A spokeswoman for Amazon told ARLnow that the county had included the dark fiber network in its pitch for the company’s second headquarters, and that the upcoming County Board vote was “just part of exploring everything that Arlington had included in the original proposal.”

“We don’t have specifics to share about our ongoing discussions but look forward to learning more about the program,” the company spokeswoman told ARLnow, adding that the NDA will allow the county to “fully brief” Amazon about the capabilities of the network.

However, the exact details for how Amazon and JBG Smith could use the network are murky.

“Agenda Item #18 was removed because the County wasn’t able to get feedback yet from the company,” said county spokeswoman Jennifer Smith.

JBG Smith declined to comment when asked for more information about the company’s interest in the network.

And as of today (Wednesday) at 12:30 p.m., the agenda included no staff reports to the Board with more information about the items. Smith said the documents had not been uploaded due to a “technical issue” and were due to be published later today.

As for other organizations looking to “light” the dark fiber network?

“Parties are able to use the fiber network and we are in negotiations with several entities today to also use it,” Belcher said.

Nearby, Alexandria is putting out a bid to build its own dark fiber network as well.