Rosslyn-based Airside Mobile, a travel app developer founded a decade ago by a pair of former TSA employees, is making national headlines thanks to a bit of timely research.

With the busy holiday travel season getting underway, Airside Mobile released a study, using data from Customs and Border Protection, ranking Thanksgiving passenger wait times for international arrivals at the 25 busiest international airports in the U.S.

The study is on-brand for Airside Mobile and its flagship Mobile Passport app, which “speeds you through U.S. Customs and Border Protection at 30+ airports and cruise ports.” Here’s what company said about the study:

It’s well established that Thanksgiving is one of the busiest air travel periods of the year. Each year, there is lots of commentary around the domestic travel volume, but little attention is given to the international travel volume which also experiences a spike around Thanksgiving. Upon arriving to the U.S. from international destinations, all passengers must pass through U.S. Customs and Border Protection’s clearance process. A passenger’s wait time for this clearance process is highly variable and driven by factors including volume of arriving passengers, number of open CBP processing booths, citizenship status, and the use of Global Entry or Mobile Passport Control. Using CBP’s Airport Wait Time tool, we analyzed 12 days of Thanksgiving 2018’s travel window (11/16/18 – 11/27/18) to predict the busiest days and times of Thanksgiving 2019’s travel window (11/22/19 – 12/2/18) at 25 of the highest volume airports.

Phoenix Sky Harbor, San Jose (Calif.), Baltimore-Washington, Charlotte Douglas and Philadelphia international airports ranked No. 1-5 respectively, while Newark, Miami and San Francisco were at the bottom of the list. 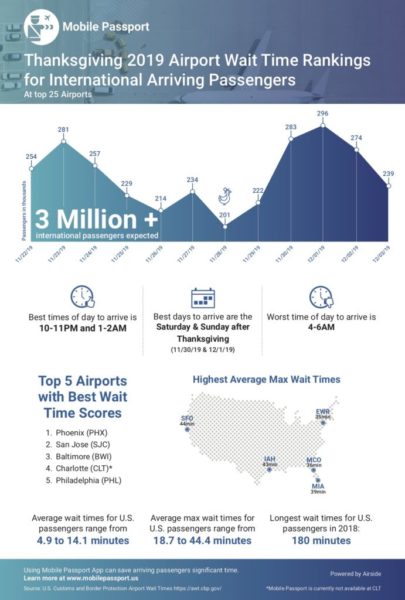 So far the wait time study has been reported by CNBC (“Flying this Thanksgiving? Here’s how long you’ll wait at immigration and security”) and USA Today (“Thanksgiving travel: Airports with the shortest and longest customs lines”).

“We’re seeing a small trend during the Thanksgiving window, with a lot of folks taking advantage of the long weekend to go abroad,” Patrick Merfert, Airside’s vice president of marketing, is quoted as saying by CNBC. “We wanted to see what it was going to look like when they arrived back home.”

“You tend to see a lot of smaller airports performing quite well, which is partially due to lower traffic, but you also see some larger airports punching above their weight,” Merfert also said, per the financial news network’s article. “Washington Dulles is ranking quite well despite having moderately high traffic.” 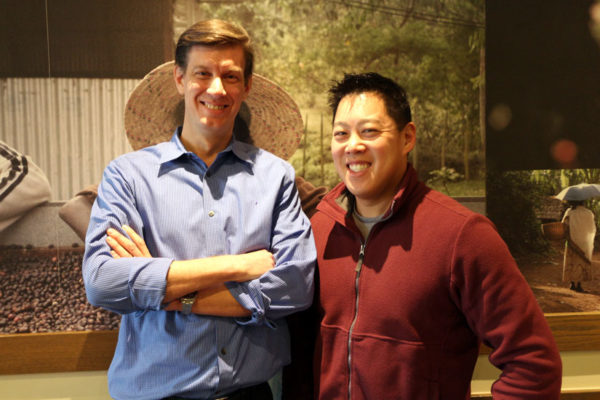 Crunching data and producing interesting infographics or rankings, then pitching the results to journalists, is a well-established way for companies to try to earn free media coverage. While many rankings never go beyond a press release, Airside Mobile was able to capitalize on public interest in holiday travel to pick up coverage from major outlets.

It’s not the only PR win for the company. CNBC also reported in August that Mobile Passport “makes clearing US airport immigration and customs a breeze,” following the release of the company’s premium service, dubbed Mobile Passport plus.