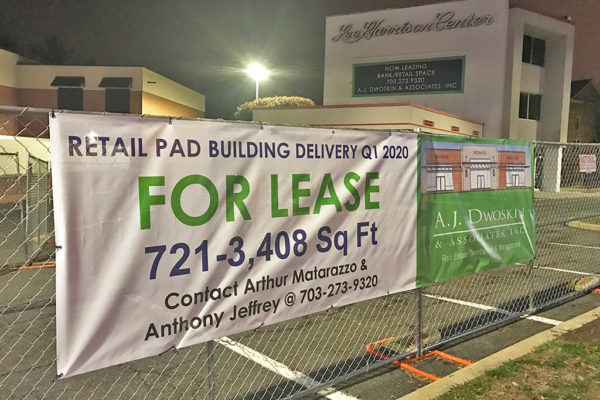 Up to three new businesses are set to replace the long-vacant Cardinal Bank building at the Lee-Harrison Shopping Center.

According to the shopping center’s developer A.J. Dwoskin & Associates, the bank’s demolition began earlier this week, and the new building will be “going up as quickly as possible.”

The company is early in its efforts to lease the 4,312 square feet of available space and “[does] not have any signed leases yet.”

“Depending on what deals come our way, we could have up to three new businesses,” said A.J. Dwoskin Marketing Director Lindsay Gilbert.

A county building permit submitted by A.J. Dwoskin at the bank’s current address (5335 Lee Hwy) details the building’s demolition, and adds that “the proposed building will be a 3,476 square foot restaurant space with a maximum of 125 seats.” The company would not comment on the permit or its mention of a restaurant.

Per signage at the construction site, the “retail pad building delivery” is expected in the first three months of 2020, but Gilbert said she does not expect any businesses operating in the spaces until later in the year.

“We’re particularly excited about the demolition, as that always creates a little neighborhood buzz,” Gilbert said.

In addition, the developer is also currently looking to lease two spaces in the lower levels of the busy shopping center, which houses a Harris Teeter store and restaurants like Peter Chang.

END_OF_DOCUMENT_TOKEN_TO_BE_REPLACED

More Stories
Your Beermonger: Is That An Ocelot?!Mark Your Calendars for Holiday Real Estate Pop-Ups