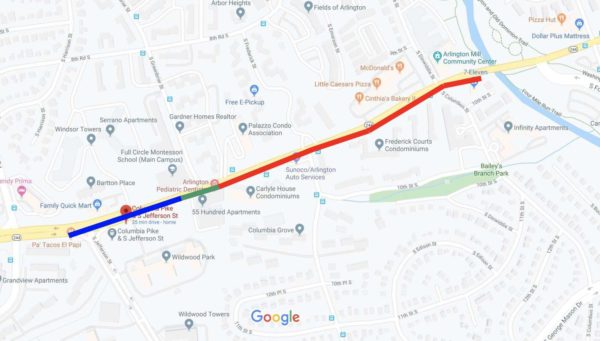 The Arlington County Board voted unanimously at its Tuesday meeting to approve boosting an existing $17.5 million contract for the work to $23 million — a $5.5 million increase — due to some unforeseen circumstances.

In a report to the Board, county staff said that its contractor, Fort Myer Construction Corporation (FMCC), encountered a mysteriously out-of-place underground duct bank — the conduit through which utility lines are placed — on a segment of the undergrounding work from S. Greenbrier Street to the Four Mile Run Bridge.

(FMCC’s contract is for one segment, from the county line to Four Mile Run, of the overall project.)

The rogue duct bank was adjacent to Columbia Pike, where a new duct bank containing the currently above-ground utility lines was to go. The county says it’s investigating why the existing duct bank, which is owned by Verizon, was not under the roadway as records indicated.

Given that the lines can no longer be placed next to the roadway, they will have to go under Columbia Pike, county staff said. That will require more extensive lane and intersection closures and occasional weekend detours — thus the extra expense.

At last night’s meeting Board members pushed for much of the disruptive work to be done at night, to prevent a traffic nightmare along the Pike during peak times.

“This is going to be a mess,” said Board member Libby Garvey.

More from the county staff report:

FMCC completed the first part of the new duct bank between South Jefferson Street and South Greenbrier Street without issues. The initial excavation for the segment between South Greenbrier Street and Four Mile Run Bridge uncovered an existing underground communications duct bank in the location planned for the new duct bank (Figure 1). This conflict resulted in a revised design that places the duct bank in the roadway, making the work more complex as construction must contend with heavy traffic conditions. The overall duct length has increased because the new duct bank must be routed around many existing utilities. Additionally, the project was delayed due to the time necessary to complete the redesign. A contract change was negotiated with FMCC for the additional cost to install the redesigned underground duct bank and return the project back to the original substantial completion timeframe. The result of negotiations was an increase of $5,500,000.

Construction that is part of this contract change will require additional lane closures beyond those currently in effect today. These will vary depending on the phase of construction and will be communicated to the public in advance. Some left-turn restrictions will be implemented in phases at intersections and driveways and some intersections will require closures and detours where the work will occur on weekends. Access to driveways will be maintained throughout the project area and bus stops will be temporarily relocated and consolidated when impacted by construction.

During the engineering phase of the project, records showed the existing communications duct bank was inside the roadway with sufficient clearance for the planned new duct bank. An investigation is ongoing into the reason why the existing duct bank was found to be in a location that interfered with the new duct bank and will continue concurrently with construction of the revised design.

Map via Arlington County. Kalina Newman contributed to this report.