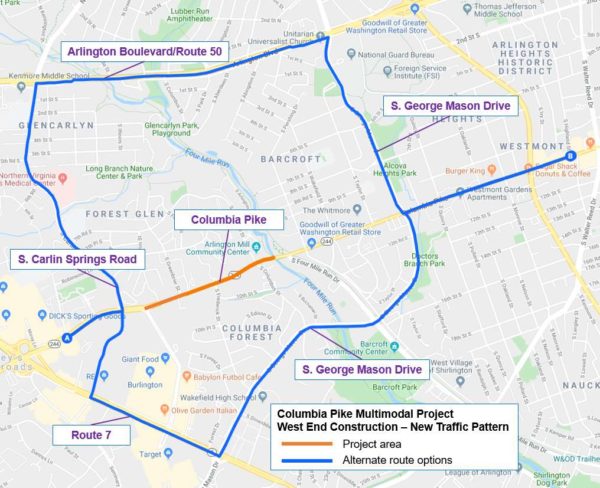 “Starting on or about Monday, Dec. 30, there will be new traffic patterns along the west end of Columbia Pike, in Arlington, which are expected to cause additional delays for those travelling through this area,” the county said in a press release. “The changes are necessary so the contractor for the Columbia Pike west end project can install a utility duct bank system beneath the eastbound lanes.”

Originally the utility undergrounding project was to have placed the aforementioned duct bank under the sidewalk, but a bundle of communication lines was unexpectedly found where it was supposed to go, necessitating the placement under the Pike itself — at the cost of lane closures and an extra $5.5 million.

The work will reduce the western end of Columbia Pike to one lane in each direction for most of 2020, though one additional eastbound lane will open during weekday morning rush hours.

Drivers are being encouraged to take alternate routes.

Between South Jefferson Street and the Four Mile Run Bridge, sections of Columbia Pike will be reduced to one lane in each direction daily, including weekends. One additional lane will be open in the eastbound direction, heading toward DC, during weekday morning rush hours (7 am – 9:30 am).

This lane reduction is expected to remain in place for much of the next year. Substantial completion for the Columbia Pike west end project, including utility undergrounding and streetscape improvements, is anticipated for early 2021.

Traffic is expected to be affected in and around the immediate area. Drivers not heading to a residence, business or another destination in this area are encouraged to seek alternate routes to reduce road congestion.

On Columbia Pike, options for travelling around the work zone include: