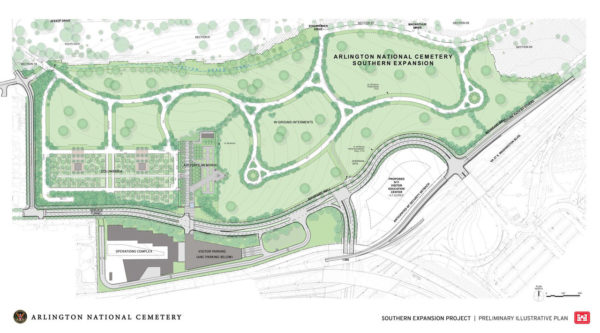 The Arlington County Board is set to vote this weekend on a new Memorandum of Agreement with Arlington National Cemetery, ahead of work on a new cemetery expansion project that will bring major changes to the eastern end of Columbia Pike.

The project, which has taken shape over the past four years, would add 70 acres to the southern portion of the cemetery, including 37 acres of additional burial space, intended to help the nation’s most hallowed ground continue burials through at least 2050. The expansion will add another 60,000 burial plots, by converting the former Navy Annex site, as well as current portions of Southgate Road and Columbia Pike, into cemetery space.

The Southern Expansion Project will result in a realignment of Columbia Pike, bringing it south of its current loop toward Southgate Road and reconfiguring both the intersection with S. Joyce Street and the ramp to Washington Blvd. While the reconfiguration may be an improvement for cars and buses, bicycle advocates have worried that the elimination of Southgate Road may make cycling more dangerous on the stretch. 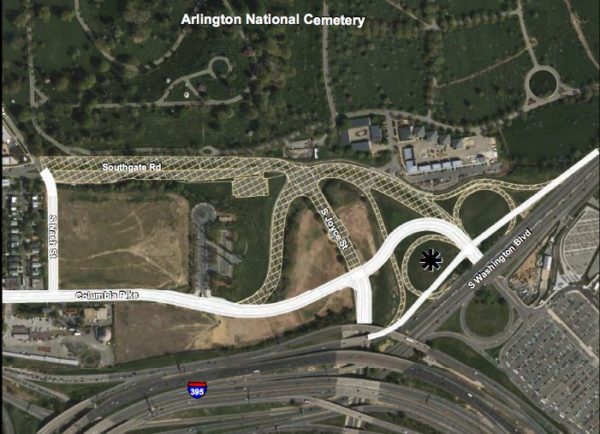 Portions of the land being added to the cemetery are owned by Arlington County. Originally the military proposed a land swap, giving Arlington a chunk of federal land south of Columbia Pike to use for county facilities, but the land swap was called off in 2017. Instead, the 2017 National Defense Authorization Act lets the Army purchase Arlington’s land for fair value, and compel the sale if necessary.

The land south of the Pike will now be used to house a cemetery maintenance and operations facility, and a parking garage that will serve visitors to the cemetery and the Air Force Memorial, which will become part of the cemetery.

More from an Air Force Magazine article this past summer:

The plan would turn the Air Force Memorial into the centerpiece of a new southern entrance to the facility, potentially bringing thousands more people to the memorial each year.

The change will alter the landscape, traffic flow, and even the way people experience the memorial, which today is accessible 24 hours a day, but under the new plan, it would be contained within the cemetery’s perimeter and only accessible during daylight hours. The memorial entrance would have a multilevel parking facility and an anticipated five-fold increase in visitors, said Maj. Gen. James A. Jacobson, commander of the Air Force District of Washington.

“This will further enshrine the Air Force Memorial as the history and heroism location for our service,” he said. “Tying it in with the cemetery does what it can’t do standing alone.”

Last March, a House Appropriations subcommittee was told that the Army was hoping to break ground on the first phase of the project in 2020, with a second phase starting in 2022 and work completing in 2025. Nearly $300 million of the project cost has already been appropriated.

The Memorandum of Agreement among the cemetery, the county and other stakeholders, under consideration by the County Board this weekend, outlines proposed “mitigation of cultural resources” as part of the project. The agreement calls for repair and reuse of the cemetery’s blue granite Boundary Wall, in the project site; a new historic marker commemorating Freedman’s Village, a village of freed slaves that was built during the Civil War on current cemetery grounds; and some alterations to the grounds around the Air Force Memorial.

Next
Inside Yesterday’s Rescue at the Courthouse Metro Station