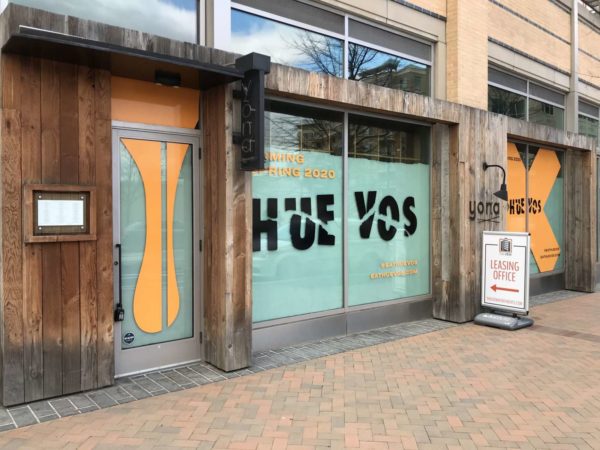 Progress is being made on Huevos, a new “all-day egg concept” from Chef Victor Albisu of Taco Bamba fame.

Albisu tells ARLnow that the restaurant’s design is nearly complete and the interior build-out will begin soon. He still expects the restaurant, in the former Yona space at 4000 Wilson Blvd, to open at some point this spring.

Opening a new restaurant with an unusual concept, in a space slightly off the beaten path along N. Quincy Street, in a neighborhood full of new restaurants, is a bold move. But one doesn’t win the RAMMY award for Chef of the Year and become a James Beard award nominee by being basic and unchallenging, and Albisu thinks Arlingtonians will embrace the idea of the egg as an ingredient for all times of the day.

“Just like any other concept or anything I embark on, I put my perspective out there,” said Albisu, whose nickname as a child was “huevos,” for his love of the humble egg.

“I just want to make a really cool concept,” he said of the egg-centric idea. “It’s a food that makes everything better.”

So what kind of dishes can you expect? A Latin-accented version of green eggs and ham; a crispy egg roll with chorizo and poblanos; bacon, egg and cheese empanadas; egg salad topped with caviar; and, yes, tacos — with an egg-based “Huevos yellow sauce.”

“As a chef and restaurateur, you want to put your spin on it,” said Albisu. “There will be some curveballs and other things on the menu that will also attract people.”

There will also, of course, be various types of coffee, along with a “modest bar” serving craft beers, mimosas and Bloody Marys.

Albisu, who grew up in Falls Church and would regularly go out to eat in Arlington, says he hopes this is the beginning of even more restaurants here. While some might be disappointed that Ballston is not getting a Taco Bamba — the existing Chipotle leaves something to be desired — he says to stay tuned.

“If what I do is interesting to everybody there, and hopefully it is, we can expand what we do in the future,” he said. “We’re always looking in Arlington. It deserves the best it can get.”

Read more →
More Stories
Your Beermonger: Know When to Hold ‘em, Part 2 — The Call is Coming From Inside the Beer FridgeAbercrombie, Swatch Close at Fashion Centre at Pentagon City Mall