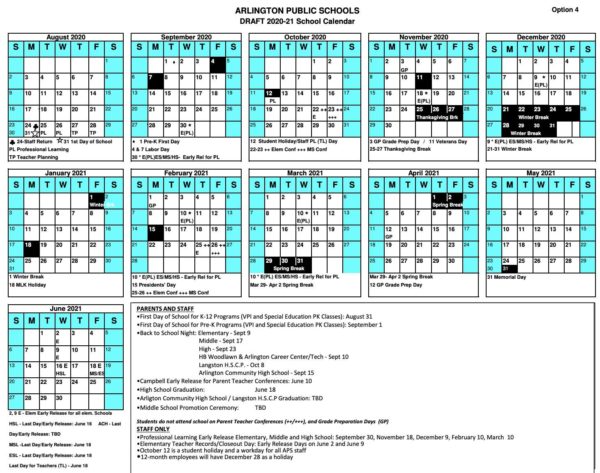 After some back-and-forth, the Arlington School Board last night approved a new pre-Labor Day start for the next school year.

The board voted to approve the interim superintendent’s recommended Aug. 31 start date, with a bit of a caveat. The 4-1 vote followed discussion about what to do about families that have already made travel plans that will now be impacted by the earlier start date.

Reid Goldstein was the lone ‘no’ vote. He previously moved to adopt a calendar that maintained a post-Labor Day start, on Sept. 8, but the motion failed. He said the board was voting too late on a change that will affect families.

Talento’s motion failed after it was asserted that existing APS policy would call for excused absences and efforts to help students catch up under such circumstances.

In supporting the superintendent’s recommendation, School Board member Barbara Kanninen noted that based on mixed feedback from parents, students and school staff, “we clearly have community members who have completely different feelings.” The Aug. 31 start was the result of school staff working “to find common ground,” she said, and wouldn’t unduly shorten the summer break thanks to this year’s late Labor Day holiday, on Sept. 7.

Under the new calendar, students will have a four-day weekend for Labor Day, after four days of school. The school year will end on June 16 for high school students and June 18 for elementary and middle school students.

As previously reported, the proposed calendar also calls for a two-week winter break, a one-week spring break, three weekdays off for Thanksgiving break, Columbus Day and Veterans Day off, and no school on Election Day in November, which will be a telework “grade prep” day for teachers, among other off days.

The neighboring jurisdictions of Falls Church, Fairfax County, Loudoun County, and Prince William County have approved pre-Labor Day start date — between Aug. 24-27 — for the next school year. Among suburban Northern Virginia public school systems, only Alexandria is sticking with a post-Labor Day start date of Sept. 8, at least for now.

Arlington Public Schools had been considering a pre-Labor Day start after state law changed last year to allow it.