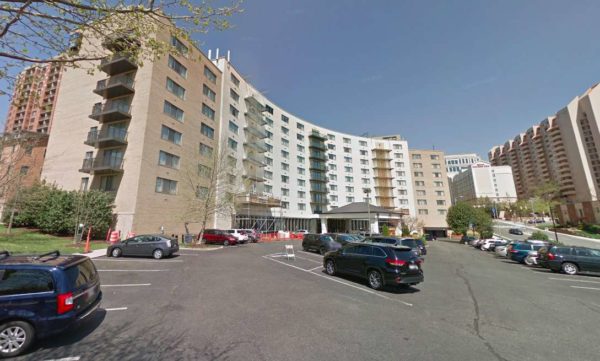 A plan is currently in process to transform the Arlington Court Suites hotel into an apartment complex, but at a Transportation Commission meeting last week the project hit a small snag as commissioners unanimously agreed the project might have too much parking.

The plan would convert the 187 hotel rooms in the Arlington Court Suites into a 180-unit residential property called Park Arlington at Courthouse. The current plans do not call for any major demolition work and staff said the proposed residential units would likely be less expensive than new construction at the same site.

The applicant could maintain as hotel use, staff said, but this project would help meet the demand for mid-rise housing at a middle-income level.

While the project is only two blocks south of the Court House Metro station, the parking ratio would increase in the new plans. Currently, there are 153 parking spaces and the proposal would elevate that to 171 spaces. Many of those would be located on a surface parking lot, with the rest in a garage under the building. The plan also calls for 76 bicycle parking spaces.

Transportation Commission member Audrey Clement, who earlier in the meeting had expressed opposition both the Veitch Street redevelopment and the Missing Middle housing study, shared her general support for the Park Arlington project, with one main objection.

“I really do support this project,” Clement said. “This is right up my alley. It does not involve the demolition of an existing property… I’m very impressed with this project, but in one respect it is not consistent with County policy, and that is the parking ratio.”

In 2017, the county adopted a new policy that said the parking ratio should be reduced from one space per unit to as low as 0.2 spaces per unit in certain areas near Metro stations.

“I do believe this project would be more consistent with county policy if it reduced the number of parking spaces and what I’m particularly interested in is the surface parking. Has the developer considered replacing some or all of the surface parking with green space? This would be a benefit to the residents of this facility.”

Am I going crazy? Is Audrey Clement really asking a developer to build *less* parking??

“It is a huge parking lot and the only way to get into the building is through the parking lot,” said Transportation Commission member Jim Lantelme. “It’s still way too auto-oriented… This parking lot is just enormous and it really doesn’t work for me. There’s nothing like this site anymore. If we’re going to have adaptive reuse, we have to adapt it to the current requirements.”

The agreement on the Transportation Commission took some of the members by surprise.

Others said that along with the parking lot reduction, the sidewalk needs to be widened.

The developer said that an alternative plan could eliminate the surface parking, but more market research needs to be done. If the building winds up as condos, the developer said there would be a higher demand for parking. The developer noted that the widening the sidewalk on N. Courthouse Road, however, is complicated by things like utilities and a retaining wall.