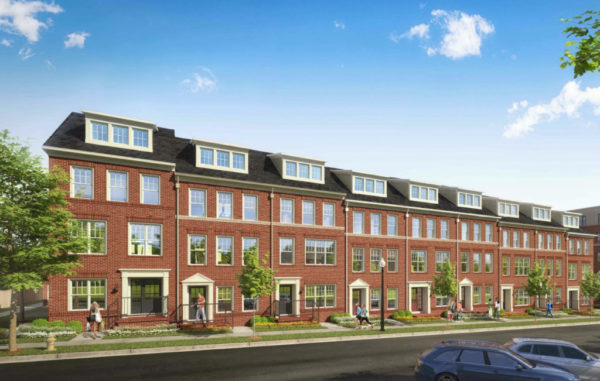 Arlington County is in the midst of a “Missing Middle Housing Study,” to determine whether legalizing additional housing types in certain areas could  “address the shortage of housing supply in Arlington.”

So what is “missing middle housing” anyhow?

It’s described by Opticos Design, whose founder claims to have coined the term, as “a range of multi-unit or clustered housing types — compatible in scale with detached single-family homes — that help meet the growing demand for walkable urban living.”

Alternately, Wikipedia describes it as “multi-unit housing types such as duplexes, fourplexes, bungalow courts, and mansion apartments that are not bigger than a large house, that are integrated throughout most walkable pre-1940s neighborhoods, often [on] blocks with primarily single-family homes, and that provide diverse housing choices and generate enough density to support transit and locally-serving commercial amenities.”

In a nutshell, missing middle housing is what’s between single-family detached homes and mid-rise apartment buildings, including duplexes, townhouses and fourplex apartments. And Arlington County is studying zoning changes that would allow it in certain places, to increase housing supply and provide alternatives to moderate-income households that can’t afford pricy detached homes (median sale price in 2019: about $950,000, compared to $575,000 for townhouses and duplexes.) 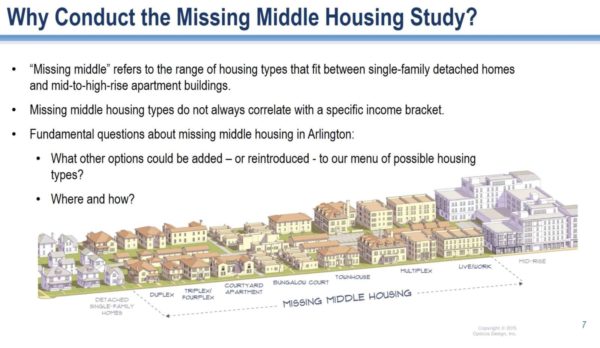 In a recent webinar, below, county staffers said the study is being conducted as housing costs rise and the county’s population is expected to exceed 300,000 by 2045.

Without finding ways to increase the housing stock and the types of housing in the county, the webinar suggested, Arlington will become more expensive and less diverse. 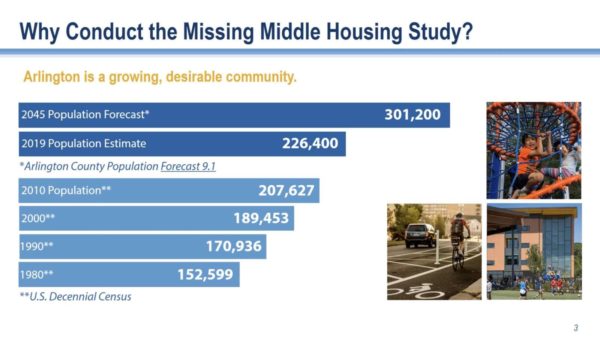 Current building trends, according to the presentation, are skewed toward the replacement of smaller, older homes with large, luxury houses in single-family home neighborhoods, while developers build small one- and two-bedroom apartments and condos along Metro corridors.

Neither are good options for a family of moderate means.

“We have a gap in housing options here in Arlington,” the presentation said. “Arlington’s Metro corridors offer smaller apartment and condo units in medium to high density buildings, however that style of housing does not suit everyone’s needs. Other neighborhoods offer single-family homes or townhomes and only a very limited quantity of other housing types.”

“If we do nothing to address these challenges, the existing housing stock will continue to get more and more expensive while existing mid-sized homes will continue to be replaced by large single-family homes and very little else,” the presenter continued. “Arlington’s vision to be diverse and inclusive will become less and less attainable. Our lowest income households are at home risk of being squeezed out, while moderate income households will also be at risk, further burdened with rising housing costs and potentially unable… to stay here.”

“A recent study found that 73 percent of the land zoned for residential use in Arlington is zoned exclusively for single-family detached housing,” the presenter said. “These zoning restrictions originated in early 20th century decisions that required the separation of different housing types. This enabled patterns of racial and economic segregation and the repercussions of that persist today.” 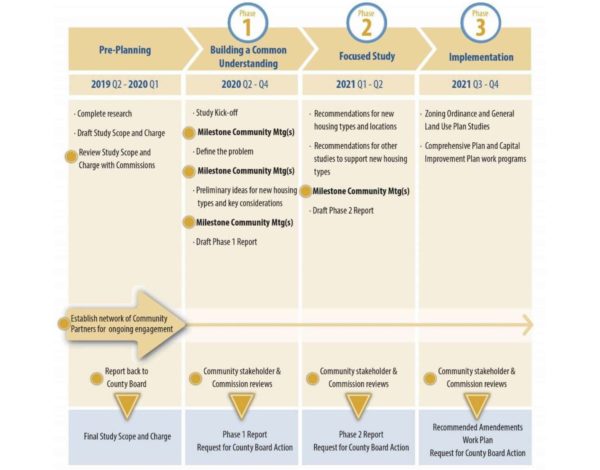 The desired goals outcomes of the study, which is getting underway this year and will be subject to a lengthy public engagement process through the latter half of 2021, include:

County officials have emphasized that the goal is not to eliminate all single-family zoning, as was recently done in Minneapolis. That hasn’t stopped criticism of the study’s goals and the potential side effects of such changes.

“This is about the densification of the county and further gentrification of the county,” Transportation Commission member and frequent candidate for local office Audrey Clement said at a recent commission meeting. “Given that is implied in the goals, to implement such a plan would require upzoning. Therefore it is disingenuous to say this is not about upzoning because that’s precisely what would be required to increase housing in residential neighborhoods.”

Arlington County is asking those who live, work or own a business in Arlington to weigh in on the structure of the Missing Middle Housing Study, in an online survey that is open through Sunday, March 1.