It has been a big year for affordable housing in Arlington, from the county initiative “Housing Arlington,” to zoning changes, to new studies.

Heading into the new year, with Amazon’s HQ2 taking shape, two local advocacy groups plan on continuing to push officials on the issue. But one believes more density is the solution, while the other claims increasing the housing supply would wreck community character and the environment.

In April, Peter Rousselot — a board member of the Together Virginia PAC and ARLnow columnist — founded Arlingtonians for Our Sustainable Future, a group working to advocate against zoning changes and accelerated density in Arlington. Rousselot previously formed a similar group, Arlingtonians for Sensible Transit, to oppose plans for a streetcar along Columbia Pike.

In recent months, flyers spotted across Arlington from ASF argue that “Arlington County has plans to eliminate single-family home zoning and change other regulations” — changes that “would cause a county-wide population surge, escalating taxes, destructive flooding and environmental degradation.”

“Don’t let Arlington become the next Houston,” the flyer says. 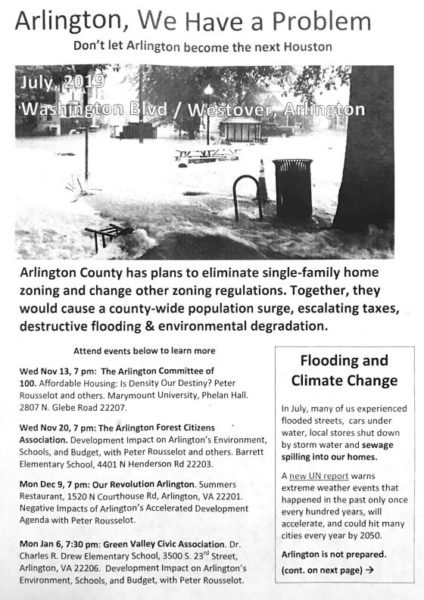 “We believe there shouldn’t be any significant further changes in zoning until we have the right planning tools,” Rousselot told ARLnow.

While ASF does not have a website, a copy of its platform provided to ARLnow argues that the county needs the following before implementing zoning changes:

“Our approach to housing affordability is that we don’t want to see this approach [where the county] accelerates the development of hundreds of new market-rate units in order to create a small number of affordable units,” said Rousselot.

“What we would like to do is redirect county taxpayer money to enable people to afford to live here,” said Rousselot. “That we decide as a community to help them to get the money directly in their hands though things like rental vouchers and housing grants.”

According to Rousselot, there are now more than 100 members in ASF.

Founded in 2003, Arlington for Everyone is a public education campaign from the non-profit organization Alliance for Housing Solutions (AHS).

The mission of the group is to “make Arlington a place where people from all walks of life are welcome and can afford to live,” per the organization’s website. 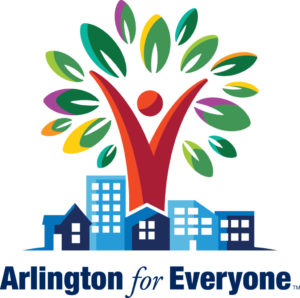 In order for Arlington to meet its needs for affordable housing, the group argues, the county needs to increase its housing supply.

“And in order to add supply, you’re going to have to increase density in some places,” said AHS director Michelle Winters.

While Arlington for Everyone serves as an education tool, all advocacy is done through AHS, Winters said.

AHS is currently pushing the Arlington County Board to upzone the land used exclusively for single-family homes, which a recent study found is as high as 86.7% of the county.

Instead, the group argues, the county needs more “missing middle housing,” or small, multi-unit homes that take up the same space as single family homes.

“Instead of one single family home, you could have a duplex, or all the way up to four units,” Winters said. A similar plan is taking effect in Minneapolis, which voted to end single-family zoning in favor of allowing duplexes and triplexes homes, by right, in all residential areas.

And as for whether the county’s environment is ready for additional density?

“Arlingtonians for Our Sustainable Future is a startup that I believe is trying to leverage the fear from the flooding to try to stop some really important potential zoning reforms,” Winters said.

“They are trying to make the case that flooding is related to density and the fact is that the two things are not connected,” Winters continued. “I think this group is not explicitly against affordable housing, they appear to just be against any of the additional density that we will need in order to create the housing supply that we need.”

Flickr (top) photo via woodleywonderworks. Photo of flyer via Twitter/@CarFreeHQ2