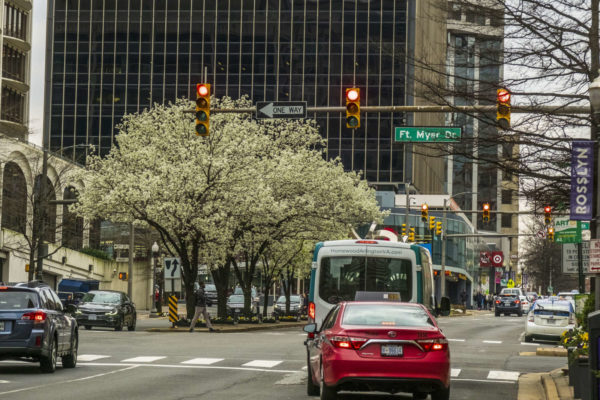 More Signs of Coronavirus Preps — Emptier shelves at local grocery stores, less traffic on the roads: there are signs that locals are taking the coronavirus threat seriously. During the first hour of yesterday’s evening rush hour, traffic on I-395 was relatively light. Last night, there was barely any canned soup left on the shelves at the Lee-Harrison Harris Teeter. [Twitter, Twitter]

Some Churches Close, Others Announce Changes — Episcopal churches in the D.C. area have suspended worship services, while the Catholic Diocese of Arlington announced a series of measures intended to help prevent the spread of disease. [Washington Post, Press Release]

Events Are Being Cancelled in Arlington — “Out of an abundance of caution, the Rosslyn BID has decided to cancel our Arts & Beats series this March and April. We are hoping to run these events later this year and we will be evaluating future events on a case-by-case basis.” [Twitter]

Arlington Conferences Cancelled — “Code for America was scheduled to host its annual summit at the Crystal Gateway Marriott in Arlington, Virginia, from March 11 through 13. A Code for America spokesperson told Technical.ly that this would have been the first time the nonprofit was hosting the annual summit in the D.C. area, as it normally takes place in San Francisco. Code for America release a statement on Friday announcing the summit’s cancellation.” [Technically DC]

Local Real Estate Still Hot, Though — “Listing service Bright MLS said closed sales throughout the Washington metro area were up 13% from a year ago to a 10-year high… In Arlington County, Virginia, the median overall price of what sold was $635,000, up 12.4%. But the median price of a stand-alone house that sold in Arlington last month was $1.14 million, up 19.2% from last February.” [WTOP]

Arlington Works on Tree Preservation — “It’s not just housing affordability and increased traffic Arlington County officials are concerned about in the wake of Amazon.com Inc.’s arrival. They’re also watching out for the trees. County officials are proposing to add one urban forester position to the Department of Parks and Recreation. The new hire is needed to expand tree preservation efforts and work through the surge of site plans developers are pitching in the area of Amazon’s HQ2.” [Washington Business Journal]