Readers of this column caught a hint about Port City’s new Beach Drive Golden Ale last fall, when brewery Founder Bill Butcher mentioned during a chat that “a new Session Ale will arrive for the spring”.

Little did we know then what this spring would be like. With a Brewer’s Association survey released this week showing nearly half of responding breweries saying they would only be able to survive between one to three months under current conditions, what’s it like to roll out a new addition to your core lineup?

I reached out to Port City Director of Sales John Gartner to find out, and to get some details on the beer itself.

Beach Drive has been in the works since July of last year. The concept was “to capture the freedom and beauty of Beach Drive in Rock Creek Park — easy going and refreshing.” Head Brewer Jonathan Reeves aimed to create a low-alcohol beer inspired by the low-gravity desítky style of Czech Lager, with the twist of using Port City’s go-to Ale yeast and a new American-grown experimental hop variety with spicy, floral characteristics reminiscent of classic European Noble hops.

Gartner says with Beach Drive, Reeves “was looking for the dryness of our Oktoberfest and the bitterness of our Helles”, and the finished product nails that perfectly. What surprised me was how full-bodied Beach Drive feels for a beer that clocks in at 4% ABV. 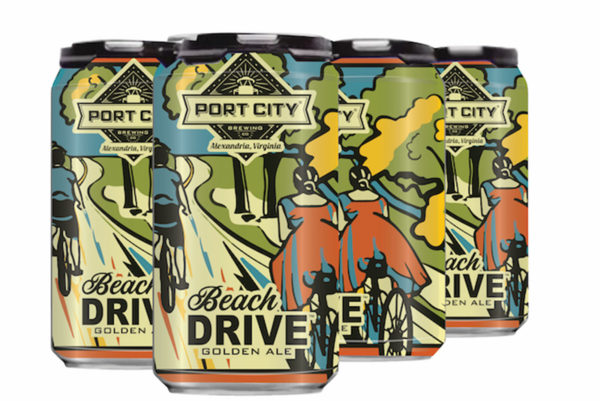 The combination of Pilsner, Vienna, and Munich malts with that yeast strain works a minor miracle toward that end, and the experimental hop comes through with just the right amount of bitterness and spice.

Beach Drive also looks great, with a very nice wrap around its 12oz cans — another new thing for Port City. In the fall, Bill Butcher was talking about continuing to use mobile canning as Port City introduced its first 12oz canned beer, but the brewery ended up finding a used canning line to install in its Alexandria brewery.

The sporadic nature of mobile canning created constraints in the brewery’s cellar, according to Gartner. Buying the canning line allows Port City to produce the amount of packaging it needs as it needs and gives it flexibility in packaging future beers (no spoilers, but: look for some new 16oz can offerings from Port City this year; new 12oz cans are likely to appear, but none are planned for the rest of 2020 right now).

I’ll let John close the column out this week with some words on the experience of introducing Beach Drive now, how Port City is weathering the pandemic,and what you can do to support your local brewery.

“Launching this brand in our current environment has not been easy… the health and safety of all of our co-workers and customers is the most important thing — so there has been a lot of changes around the brewery to be proactive about internal and external safety, which has caused things to slow down.

“Overall, our staff, distributor partners and customers (like Arrowine) have been extremely helpful… during these times, we are proud to be able to launch new brands, and hopefully create a little joy in the world.