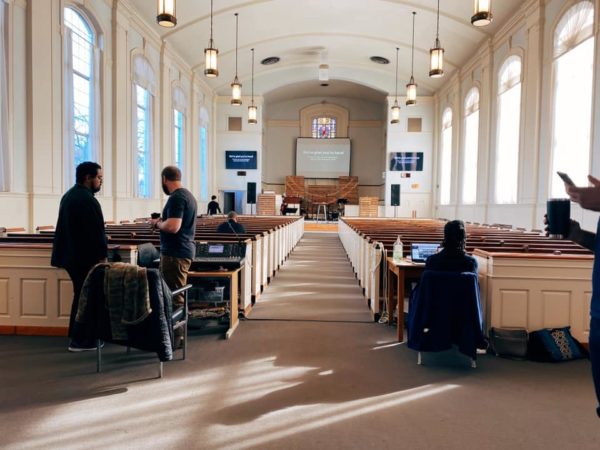 Eight churches are pooling their resources for a joint effort called The Church At Work in Arlington. The group has raised over $105,000 that organizers say is paid directly to landlords for rent assistance.

While several local nonprofits have been coordinating with Arlington County to get resources to families in need, local churches have operated their own programs. The Church at Work in Arlington is one such program.

“In one week, we’ve raised over $105,000 to help 105 needy families with $500 rent assistance, for both April and May,” Scott Seaton, the pastor at Emmanuel Presbyterian Church said. “Tese families… have lost work due to the pandemic and can’t pay their rent. Initially, some 100 families were identified, and already we have more sponsors who are ready to help if and when more families are referred to us.”

Seaton told ARLnow that these families are vetted by social workers with Arlington Public Schools, though The Church at Work in Arlington has no ties with APS in any official capacity.

“We put word out to our church members,” Seaton said. “Some folks directly wrote a check to the landlord for efficiency’s sake. We need to get checks in the hands of landlords as soon as possible.”

The organization’s website says the group provides $500 for rent in April and another matching amount for May.

Seaton said the landlords confirm the receipt of the check and identify the residents whose rent is being covered. It’s a system that’s reliant on the integrity of local landlords, but so far Seaton said the results have been positive, like a landlord who didn’t deposit the check until he was sure which tenant was being covered, after the name had been initially misspelled.

Seaton said the churches have been long-standing partners, but that it was only with coronavirus that they put a name on their joint charity efforts.

“It was the most efficient way that churches could respond directly,” Seaton said. “It was an informal group of churches that are already in relations with each other.”

The fundraising was paused last week, Seaton said, as the APS social workers were on spring break. He expects it to pick back up this week with 77 donors ready to go.

“These are social workers with the schools [and they] have relationships with the families and know their circumstances, [we’re] going on their word,” Seaton said. “There’s no official relationship or partnership, just churches through personal relationships wanting to help as soon as possible.”

Seaton said the organization hasn’t been putting out a plea for more money and isn’t focused on fundraising at the moment, but is providing an outlet for charity through the churches.

According to the fundraising website, the eight churches participating in the effort are:

Redeemer Church released a video (below) that talks a bit about the church’s work during the coronavirus crisis.

Photo via Redeemer Church of Arlington/Facebook