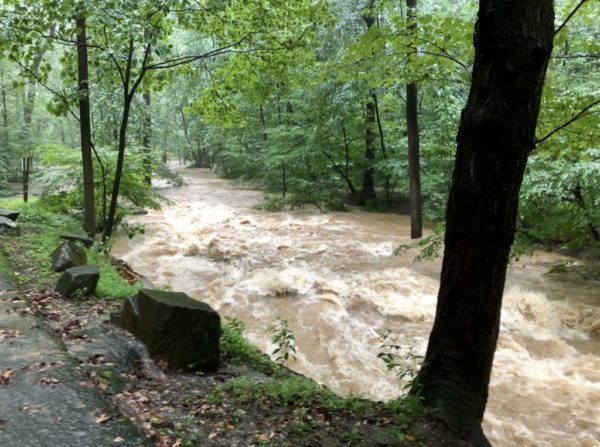 The National Weather Service has issued a Flood Watch for most of the day on Thursday.

Forecasters say heavy rain could cause flooding, particularly around streams and low-lying areas. The heaviest rain is expected in the afternoon and evening.

FLOOD WATCH IN EFFECT FROM THURSDAY AFTERNOON THROUGH THURSDAY EVENING… WIDESPREAD HEAVY RAINFALL IS EXPECTED THURSDAY AFTERNOON INTO THURSDAY EVENING ALONG AND AHEAD OF A STRONG COLD FRONT. WIDESPREAD RAINFALL TOTALS OF ONE AND HALF TO TWO AND HALF INCHES ARE EXPECTED WITH THE POTENTIAL FOR UP TO FOUR INCHES. * THIS AMOUNT OF RAINFALL WILL LIKELY RESULT IN SMALL STREAM AND MAIN STEM RIVER FLOODING. MODERATE RIVER FLOODING IS ALSO POSSIBLE. PRECAUTIONARY/PREPAREDNESS ACTIONS… A FLOOD WATCH MEANS THERE IS A POTENTIAL FOR FLOODING BASED ON CURRENT FORECASTS. YOU SHOULD MONITOR LATER FORECASTS AND BE ALERT FOR POSSIBLE FLOOD WARNINGS. THOSE LIVING IN AREAS PRONE TO FLOODING SHOULD BE PREPARED TO TAKE ACTION SHOULD FLOODING DEVELOP. &&

A Flood Watch has been issued for our region starting at 4am Thursday and continuing through 10pm. A slow moving system will bring one to three inches of rain to our region with the potential for localized amounts near four inches. pic.twitter.com/1ibRBaryy7