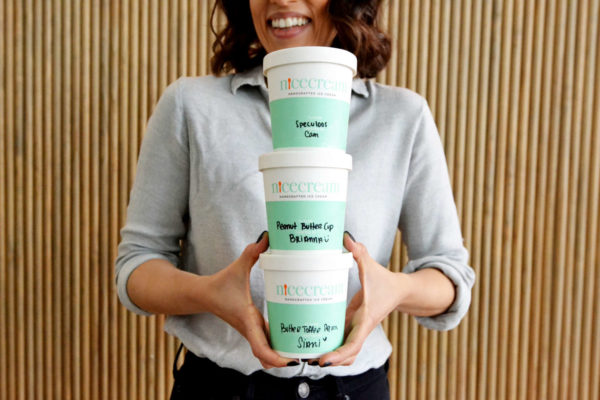 For Sandra Tran, preparing for tomorrow’s reopening of Nicecream in Clarendon feels like a jump back in time to seven years ago.

Nicecream, a handcrafted ice cream shop with four locations across Northern Virginia and D.C., is reopening its Clarendon (2831 Clarendon Blvd) and Shaw locations on Friday with ice cream scoops and pints to go. Featured flavors are planned to include honey lavender, salted caramel, Nutella, cold brew coffee, bananas and cream, and wild blueberry.

Tran and husband Gil Welsford say they plan to open with a “closed-door” style of service. A menu will be mounted outside the restaurant and customers can order and pay from their phones while workers inside make the ice cream. The items will then be placed out on a pick-up table, with no customers or delivery drivers allowed inside.

“It’s pretty enlivening,” Tran said. “I don’t know how other business owners feel, but it feels like we’re building it over again.”

Tran said this was the way it was seven years ago when she and Welsford started Nicecream. They were running around getting signs, figuring out how to put them up on the walls, handling small deliveries and tackling other tasks of that nature.

“We were meeting delivery drivers at the store because there was no one there to meet them,” Tran said. “It reminds me of the beginning again.”

With that, Tran said there’s a resourcefulness that comes with being a new business that gets lost over time as systems become routine.

“You develop new experiences as you become more seasoned, but you lose some of that scrappiness,” Tran said. “You create systems and operations to make everything more efficient. But when you’re starting like this, it’s like ‘who is the cheapest guy I can get to print this?’ It’s running around to figure out who is even open. It’s remembering how to be scrappy.”

That isn’t to say it hasn’t been tough for Welsford and Tran. Over the last few months, they had to lay off their entire staff, starting with eliminating their own pay, then to seasonal workers and full-time staff. Tran said they’ve worked to get proper resources for unemployment to their staff, but some of the seasonal workers are stuck without the full-year of employment history to help file for aid. 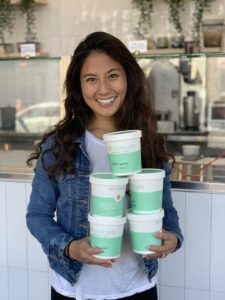 Tran said it was difficult, in the early days before they decided to close, to keep their own health standards up to date with recommendations from the CDC, governors, and the White House. The advice was changing by the day, sometimes by the hour, and Tran said it felt like everyone was crunched to make decisions about health and safety in a short period of time.

“It came to a point where I was like ‘this virus is moving faster than any of us can. I can’t make the right safety decisions fast enough,'” Tran said. “Our team’s safety is number one, so basically what happened was we needed to pause and figure out how to pivot.”

“While this was all happening, while we’re trying to implement safety measures, social distancing wasn’t accepted across the board as commonplace,” she continued. “While we were putting in safety measures we had a lot of customers coming in who were considerate but not always maintaining distance. Our population was becoming educated as we were educating ourselves.”

When they finally closed, Tran said they pivoted to online orders — something they hadn’t done before — and updating the website to be more user-friendly. Tran said they didn’t have access to web developers, so she had to learn on her own.

“We’ve been obsessed with an experience,” Tran said. “We’ve never been really motivated to go online — we wanted people to come in and watch us make ice cream, seeing us add blueberries and farm-fresh milk. We didn’t focus on the Starbucks model of come in and grab a coffee because you need one.”

As they get ready to open Friday, Tran said some of that is changing. The company is starting to lean into the tech side of things, and Tran said even once the pandemic is done, online ordering will likely be there to stay for Nicecream. When Nicecream started offering once-a-week pick up for ice cream, Tran said they were overwhelmed by the initial demand.

“We have been inundated with requests for orders,” Tran said. “Been doing the one-day ordering for Thursday and receiving hundreds and hundreds of orders. People are looking for simple pleasures. They can’t go out and celebrate a birthday with a five-star meal or those special moments. A cup of ice cream is a simple, $5 easy thing that makes you happy and reminds you summer is coming.”

Most of the customers, Tran said, have been moving from buying single scoops to buying larger quantities — up to 15 pints at one time — to stock up. Nicecream is embracing that, and said they will be putting together packages like “buy four and get one free, buy five and get a sundae kit.”

When the pandemic is finally over, Tran said she suspects it will still be a while before things truly go back to normal. Tran and Welsford are already planning for getting through the rest of the year safely.

“Everyone is saying the back to normal is going to be a ramp-up. We’re going to double down on this online ordering piece. Our team safety is number one. If we can’t unlock our doors, if we can’t let customers inside until Christmas, that’s what we’re going to have to do.”

END_OF_DOCUMENT_TOKEN_TO_BE_REPLACED

More Stories
Statutes of Liberty: The 60-Day Immigration Ban and What It May BringThe Hurtt Locker: Campaigns and Elections in the Age of COVID-19