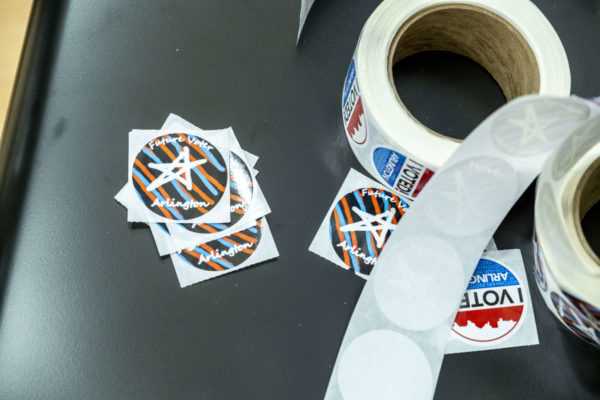 With a candidate filing deadline just a week away, Arlington Democrats are scrambling to nominate a candidate for the special election to fill Erik Gutshall’s former County Board seat.

Barring an intervention by state lawmakers and Gov. Ralph Northam, in support of which the local party has gathered more than 750 petition signatures, the nominee will be chosen by dozens of party insiders in a closed caucus next Wednesday.

The four candidates seeking the Democratic nod are School Board member Barbara Kanninen, former Columbia Pike Revitalization Organization director Takis Karantonis, ARLnow columnist and former state Senate candidate Nicole Merlene, and Chanda Choun, who withdrew from the County Board primary to run in for the special election instead.

To give rank-and-file Democrats a chance to hear from the four candidates, the Arlington County Democratic Committee will be holding an online candidate forum this weekend.

As it stands now, the Arlington Democrats have no option but to select the Democratic nominee through a closed virtual caucus, which involves a vote by the members of its Steering Committee and County Committee that will conclude by May 7.

Despite these difficult circumstances, the Arlington Democrats remain committed to making sure that ALL Arlington Democrats have the opportunity to hear from the candidates running for this position.  To that end, we are pleased to bring you a Virtual Candidate Forum, this Sunday, May 3, at 1:00pm in partnership with the Arlington Young Democrats. RSVP here and on Sunday, you can join the forum here. […]

You can submit your questions for the candidates here! All questions must be submitted by Saturday, at 5pm!  Make sure you learn about each candidate, listed in alphabetical order below, before the Candidate Forum on Sunday!

The local party and the County Board are both pushing for state intervention in order to push the special election back and allow time for a vote-by-mail caucus open to all Arlington Democrats.

An online petition launched by party to push the nomination deadline back by two months has so far gathered more than 800 signatures. The County Board, meanwhile, voted unanimously on Thursday to petition the Virginia Supreme Court to intervene and push the election “to August 4, 2020 or later.”

The Board adopted a resolution saying the July 7, 2020 special election date ordered by the Circuit Court of Arlington to fill the vacancy “poses significant, unnecessary risks to public health, jeopardizing election officials, candidates, and the members of the public participating in the election process, and seriously undermining participation in it,” due to the novel coronavirus pandemic state and local emergency.

The Board voted 4-0 to adopt the resolution.

State law “provides that, when an emergency has been declared by the Governor, the Governor may postpone an election by executive order to a date not exceeding fourteen days from the original date of the election,” the resolution notes, “and further provides that, where the local governing body determines a longer postponement is required, the governing body may petition a three-judge panel of the Virginia Supreme Court to extend the special election to a date it deems appropriate not to exceed thirty days from the original date of the election.”

Arlington Republicans are working to recruit their own candidate for the County Board special election, the Sun Gazette reported today, noting that a former County Board member is also considering his options.

“John Vihstadt, who served from 2014-18 as an independent, has suggested he is not inclined to run, but has not entirely ruled out a bid,” the paper reported.