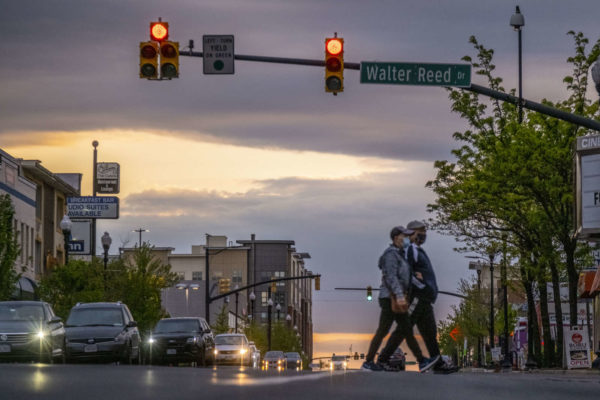 During an online town hall discussion today, county officials announced that a new walk-thru testing center for COVID-19 is coming to Arlington.

Assistant County Manager Jim Schwartz said the county is currently planning to open the site somewhere on the southern side of Arlington County. The site would be an addition to other drive-thru locations currently operating in Arlington.

“We are currently planning to open a walk-thru site,” Schwartz said. “It should be open by May 11. We have a site in mind on the south side of the county but we’re working to cement that.”

Schwartz said people could drive to the location, but they would park and walk into the site to have a sample collected for testing.

“Right now, all samples being taken are under a doctor’s orders,” Schwartz said. “[People being tested] needs to have a doctor provide the order, usually over the phone or by email. Present that at the testing site.”

Schwartz said those being tested now are symptomatic. The virus can be carried and spread by people exhibiting no symptoms, but Schwartz said the county does not have enough tests for asymptomatic cases.

The walk-thru testing site — conducted in partnership with Virginia Hospital Center, like the county’s drive-thru testing site — will help fill what County Board member Katie Cristol identified as a gap where those most vulnerable to the disease may also be low-income workers who don’t have access to car transportation.

“The walk-in site is part of a recognition that those most vulnerable to the disease are those who might not have a car,” Cristol said.

Schwartz also said the County is working on a partnership with the Arlington Free Clinic to help test and treat people who are uninsured.

In the same town hall, public safety officials said calls for service have gone down. Echoing ARLnow’s previous reporting, the Arlington County Fire Department said there has been a 25 percent reduction in overall call volume, but the work has not eased because each call requires asking people to step out of the house or away from a group setting, or to put on a mask.

“There is less volume of calls,” Fire Chief David Povlitz said, “but we’re spending more time on those calls.”

Police Chief Jay Farr said that his department has seen a similar reduction in call volume, while online reporting has gone up 50%. The most common calls that Farr said police have been responding to are calls from residents reporting groups congregating in local parks, which are closed.

“The challenge to date has been around parks,” Farr said. “With weather changes, people have been trying to get out and social distancing rules get harder to deal with… Our mission to date has been to see compliance. We’re not there to write summons, we’re reminding people.”

Farr said there have been some calls for people congregating at residences, but most have been to parks and open areas. There has also been some issues with businesses not complying with state restrictions, but Farr said those have been settled so far with warnings.

“We’ve been to a few businesses where we have gone out more than one time, and gave them the governor’s order and explanation of compliance,” Farr said. “It starts with a warning. So far we haven’t had any citations, but the heavy stick here is a misdemeanor for violating the governor’s order.”

Tipsters have told ARLnow of nail salons and other businesses deemed non-essential that have nonetheless been serving customers during the governor’s stay-at-home order.

Like the fire and police departments, Candice Lopez, manager of local domestic violence prevention organization Project PEACE, said calls for domestic violence have gone down. But she cautioned against seeing that as a good sign.