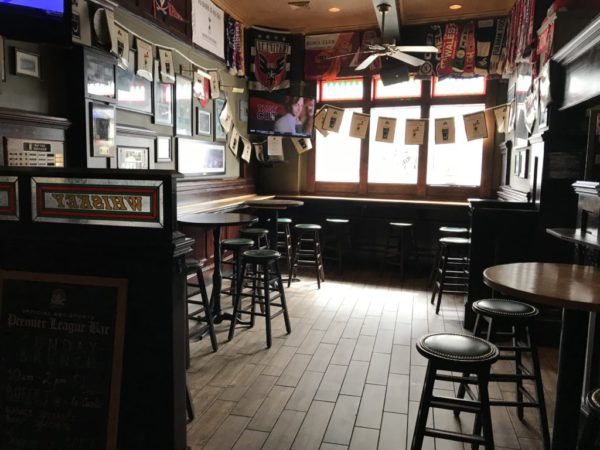 Ireland’s Four Courts will once again be serving shepherd’s pies and fish and chips, starting Friday.

The long-time Courthouse watering hole closed on March 15, devastatingly just before St. Patrick’s Day. But customers have rallied around the pub and donated nearly $35,000 via a GoFundMe campaign to benefit Four Courts and its laid off employees.

“The closing of the doors is like closing the doors on a family, placing unwelcomed economic burdens and stress on its members,” the GoFundMe page said. “So please raise your glass and give a donation in honor of Ireland’s Four Courts and its staff members that have given so much to this community. All donations will go directly to help support the staff during this time of uncertainty.”

Yesterday, a month and a half since the closure, came word on the fundraiser page that Four Courts will be reopening Friday for takeout.

“We are pleased to announce that everyone has been offered their position back and that we plan to open for to-go orders on Friday, May 8,” Four Courts manager Dave Cahill wrote. “We are awaiting further instruction from the our Governor in regards to reopening our bar and restaurant for dine in customers… Ireland’s Four Courts has served the people of Arlington for over two decades and we have never been more excited to open our doors again!”

The announcement comes amid a wave of restaurant reopenings around the D.C. area, though one prominent local restaurant owner cautions that many are due to business receiving PPP loans. The doors might not stay open past the Fourth of July, he suggested.

Many restaurants opening this week because of PPP funding. This is a temporary open -8 weeks. Restaurants that close for 14 days are usually due to COVID 19 illness onsite. No restaurants want to reopen in this market. But they all want to produce something to justify PPP $. https://t.co/L4ZYsKhGvQ

3) Sales from take out, delivery, and even the possibility of reduced in store dining will not be sustainable.

The full announcement from Four Courts is below, after the jump.

A Note of Appreciation to our Community

March 15th, 2020 will live long in the memory for those of us who work and socialize in Ireland’s Four Courts. It was a day of great uncertainty as we closed our doors due to the outbreak of COVID-19. Much has happened in the weeks and months that have passed and we have seen some heroic efforts by people in our community. The sacrifices made by our doctors, nurses, first responders and other front line workers are unprecedented. At Ireland’s Four Courts we would like to acknowledge this sacrifice and look forward to welcoming all of you when you come to our restaurant.

As many of you know the staff at Ireland’s Four Courts were laid off during this crisis. We are pleased to announce that everyone has been offered their position back and that we plan to open for to-go orders on Friday May 8th. We are awaiting further instruction from the our Governor in regards to reopening our bar and restaurant for dine in customers.

The staff of Ireland’s Four Courts would again like to take this opportunity to thank people for their kind donations to our Go Fund Me campaign. Your generosity has allowed us to feed our staff and has allowed us to write checks to help support our staff financially. We have always tried to be a neighborhood bar and help out our neighbors when we could. It is very gratifying that in our hour of need it was our Four Courts’ Family that helped our staff. As we moved forward we hope to be able to repay your generosity and we look forward to serving all our customers again.

Ireland’s Four Courts has served the people of Arlington for over two decades and we have never been more excited to open our doors again!