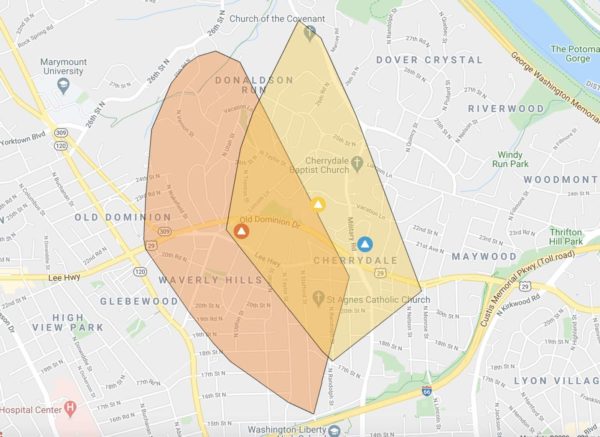 The arrival of cold temperatures was preceded by a line of rain showers packing gusty winds that knocked out power to part of Arlington.

Portions of residential North Arlington along Lee Highway — including the Cherrydale, Waverly Hills and Donaldson Run neighborhoods — are without power as of 8:30 p.m. In all, Dominion is reporting 1,641 customers in the dark.

Video posted to social media shows dark clouds and rain arriving, as flashes from transformers can be seen in the background.

Traffic backups are being reported at the now-dark “five points” intersection on Lee Highway in Cherrydale. Police have also been dispatched to assist with traffic control on N. Quincy Street at 20th Street N., where downed utility lines have been reported.

Mother Nature, meanwhile, is not done with us yet. High winds and near-freezing temperatures are expected Saturday. From the National Weather Service:

STRONG WINDS ARE EXPECTED SATURDAY. A WIND ADVISORY MAY BE NECESSARY AS WINDS COULD GUST TO 50 MPH.

A FREEZE WATCH IS IN EFFECT SATURDAY NIGHT INTO SUNDAY MORNING FOR PORTIONS OF NORTHERN VIRGINIA.

More on the storm and the power outages via social media:

@dougkammerer @nbcwashington @capitalweather so this just happened! Watch for the transformers blowing at the end! @ARLnowDOTcom pic.twitter.com/6RvyA9UmUv

And there goes the power. Several huge booms after the storm blew in just now. Must be transformers blowing up in North Arlington? @ARLnowDOTcom

8:32 pm: This appears to be a power flash. Winds can be locally intense especially southwest of the city as this line passes. https://t.co/AYpFvQ3gDj

815pLine of heavy and gusty showers about to punch thru District… Temps will steadily drop in its wake. pic.twitter.com/62IPaJ768g