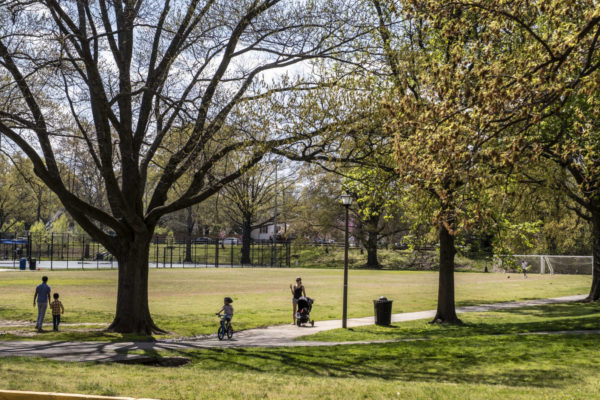 A ranking of park systems in cities across the country (yes, we know Arlington is not a city) placed Arlington’s fourth, not far behind neighboring D.C.

The Trust for Public Land’s ParkScore index ranked the top 100 localities on their parks, based on access, acreage, amenities and investment.

Arlington ranked 100 out of 100 for investment, meaning the amount spent on parks per resident. It also ranked 99 out of 100 on access to parks (the portion of residents within a ten-minute walk to a park) and 89 out of 100 on amenities (features like basketball hoops, playgrounds and dog parks). A press release noted that the park access score had inched up from 98% last year and exceeded D.C. in both access and amenities.

At 38 out of 100, Arlington scored lowest on acreage — the median park size and percent of area dedicated to parks.

“Arlington fell behind on park acreage,” a press release noted. “The [county] reserves 11 percent of city area for parks, compared to the District’s 24 percent. The nonprofit organization reported overall progress for parks this year but warned that city park systems have reached a critical tipping point, as widening inequities [in] park access and COVID-related budget cuts risk irreversible damage in 2020 and beyond.”

This is the third year in a row that Arlington has been ranked fourth, recovering from a sixth-place ranking in 2017.

“We are proud to be recognized again this year for our outstanding park and recreation system,” Jane Rudolph, Director of Arlington’s Department of Parks and Recreation, said in a county press release. “The County’s ongoing commitment coupled with the involvement and support of our residents make Arlington’s park and recreation system what it is today – a valued resource for our diverse community. And though our parks are temporarily closed due to COVID-19, our great park system is one that can be used long into the future.”

The top three locations on the ranking were Minneapolis, D.C. and Saint Paul, Minnesota.

“When stay-at-home orders permitted, people increasingly turned to parks, trails, and public open spaces to connect with nature, exercise, and enhance their mental and physical health,” said Diane Regas, President and CEO of The Trust for Public Land, in a press release. “Residents deeply value parks, but continued inequity and the risk of future budget cuts threaten severe damage to the park systems that make many cities so livable.”

Trails in Arlington’s parks have remained open and busy during the pandemic, while the parks themselves are closed to everything other than those walking to and from trails.