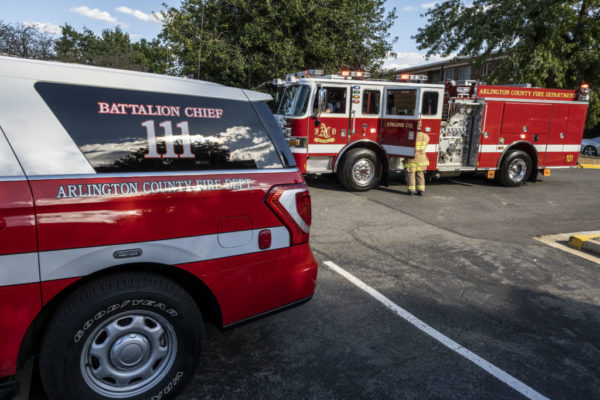 The county has acquired a rapid testing machine, which is currently undergoing a certification process. Once its accuracy is certified, it will be used to regularly test law enforcement, fire department and emergency communications personnel, as well as public health and other critical county employees.

Aaron Miller, the county’s Director of Public Safety Communications & Emergency Management, tells ARLnow that dozens of public safety personnel were quarantined at one point last month due to possible exposure to the coronavirus. At least one firefighter, and potentially several more, had tested positive for the virus in by late April. Previously, county officials declined to provide figures about quarantine levels among first responders.

In a written statement, Miller emphasized that the quarantines did not result in a reduction of emergency services in the county.

Arlington County has obtained a quantity of Mesa Biotech’s Accula SARS-Cov-2 Tests, an FDA-approved “rapid” molecular PCR test cleared for use in patient care settings outside of the clinical laboratory environment. The rapid testing system is currently under laboratory-required validation with known positive and negative samples. Once the validation is completed, we plan to develop a testing strategy for approval by the Public Health Department. First responder testing will allow quick diagnosis of police, fire, sheriff, 9-1-1, and public health personnel, as well as other critical employees who are experience symptoms while on or off duty. Testing should be available during the first part of June.

The number of firefighters, police officers, and sheriff’s deputies in quarantine fluctuated during May. The total number ranged from single digits into the forties. Following the Public Health Department’s direction, each case is investigated, testing ordered as appropriate, and the length of quarantine or isolation is determined in consultation with physicians and public health specialists. The safety of our personnel and their families is a top priority. Regardless of the number of quarantines, the levels of emergency or preventive services has not decreased for Arlington County. The County is always monitoring its workforce capacity and continues to maintain staffing levels for the services needed for Arlington residents.

In addition, County takes many steps to protect its essential workers. This includes providing personal protective equipment (PPE) to all frontline employees, increasing cleaning of facilities and equipment, quarantining employees who may have been exposed, modifying services to limit interactions between staff and promote social distancing, and implementing rotational schedules or extended hours to ensure high-priority essential services continue.

The first responder testing came to light last week in remarks made by County Board Chair Libby Garvey during an online interview with the moderator of a popular local Facebook group.

During the interview, Garvey said she was concerned that Virginia might have to go back to a stay-at-home order if the current Phase 1 reopening results in additional virus spread.

“I think it’s a really good question as to whether we’ll be able to stay in this phase or move back,” she said. “I’m pretty confident here in Arlington, we’re continuing to see it’s kind of level, but not great — the virus is still here.”

Garvey was also asked about the relative paucity of testing in Arlington, which has since increased, at least temporarily. She said part of the blame falls on the state government for continuing to require that those seeking testing have a doctor’s note and symptoms. Such testing does not catch COVID cases among asymptomatic spreaders, who have the virus but don’t have the symptoms.

Reuben Varghese, Arlington’s Public Health Director, tells ARLnow that the directive mostly affects county-run sites, like the drive-through testing site near Washington-Liberty High School and the walk-up site along Columbia Pike. He said he hopes to work with the state to conduct more mass-testing events that do not require a doctor’s note.

“At this time, [Virginia Dept. of Health] guidelines still require a doctor’s order for most sample collections being done in Arlington County, such as at the Quincy and Arlington Mill sites, and there are no plans to change those guidelines at County-partnered sites,” he said. “However, at the larger community testing events, such as the one on May 26 at Barcroft, no appointment or doctor’s referral was needed. Given the overwhelming response to that site and to others like it around the region, we would expect the Commonwealth to continue these types of testing efforts. However, at this time, another event has not been scheduled here in Arlington.”

In Arlington, meanwhile, the number of new reported cases has remained low for a fourth consecutive day. Ten new cases and one new hospitalization was reported overnight, for a cumulative total of 2,133 cases, 377 hospitalizations and 117 deaths.

Arlington’s seven-day test positivity rate has fallen below 10% for the first time since mid-March, as the local outbreak began. The positivity rate, as reported by the state health department, currently stands at 9.5%. 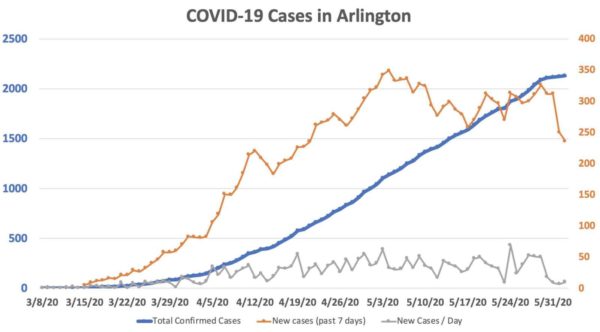