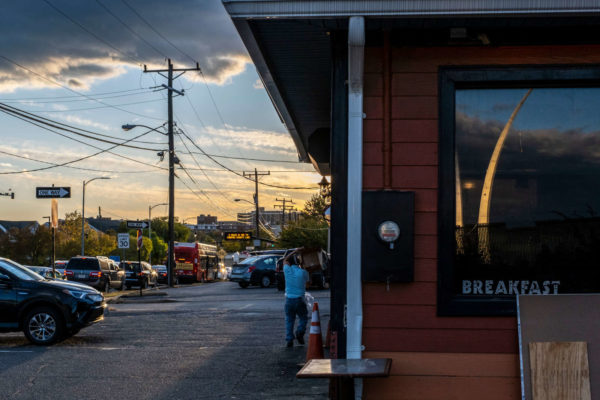 As Arlington’s restaurants try to return to some semblance of normalcy during the first phase of reopening, some local restaurants are anxiously awaiting Arlington County approval of temporary outdoor seating permits.

Owners of two eateries along the Columbia Pike corridor, Ethiopian restaurant Dama Pastry & Cafe (1505 Columbia Pike) and Ididos Coffee and Social House (1107 S. Walter Reed Drive) said getting access to outdoor dining is a crucial part of getting business back to normal.

“We are just waiting,” said Hailu Dama, owner of Dama Pastry & Cafe, which has a small parking lot in front of the restaurant, located near the Air Force Memorial. “We applied for outside dining and are waiting for Arlington County. Once that gets approved, we’ll put up tents and have some small space on the side. So far, that’s what we’re thinking about.”

Currently, Dama said his small business needs the boost — opening up an outdoor space would expand their capacity at a critical time.

“It’s just been very slow,” Dama said. “We closed for about a month because of the employees and the whole situation. We reopened three weeks ago and it’s been picking up a little bit, but to get to the point pre-corona… it’s going to take some time.”

“There’s been a little back and forth on outdoor seating,” Demise said. “That has not happened yet, it’s probably a day or two delay. Once we get that permit for temporary outdoor dining, then we should be really great.”

Ididos opened for takeout, Demise said, but as a coffee shop, business had really suffered.

“April was really bad, business-wise,” Demise said. “May picked up, but it’s not back to normal. It was about 20% down from where we used to be. It’s mainly because of the community that we were so close.”

Demise said Columbia Pike neighbors rallied to support local businesses during the pandemic, something for which he’s deeply appreciative.

“With the County approving, hopefully, we can do outdoor seating,” Demise said. “I think that will boost sales. I don’t want to say we’ll go back to normal, but right now it still hurts.”

Even with the permit, though, Demise said the state has still put limitations on outdoor seating that he said business owners should be the ones to set.

“Outdoor seating is 50% of indoor seating,” Demise said. “In our case, we have 13 seats allowed, so we can only do six seats outdoors. That limitation probably hurts, but it’s better than nothing.”

Demise said it took a lot of work, but he’s been able to keep most of his employees and adjust schedules to keep nearly everyone on payroll. He said he’s looking forward to being able to bring people to the restaurant to sit around.

“People loved to sit around the restaurant, so missing that was a big challenge,” Demise said. “Adjusting to simply pouring coffee or lattes and sending them to customers, that’s been very difficult.”